Welcome back to Traveling With Tom! This week I’ll take you on a journey towards New Orleans and the 2019 New Orleans Jazz and Heritage Festival. We left Madison on a Monday morning, albeit late due to some user induced mechanical problems with our travel trailer. Our destination for the day was the very southern tip of Illinois just before crossing over into Kentucky. It’s a distance of nearly 500 miles, Illinois is a very long state from north to south! Even though we were pushing a stiff south wind all the way, we made it to our campsite at Fort Massac State Park near Metropolis, IL before dark.

Readers may be wondering why we took this route to New Orleans rather than the more direct and faster I-55 that goes past St. Louis to Memphis, through Mississippi then into Louisiana. Here’s the reason, my traveling partner wanted to spend a couple of days checking out the big Quilt Show and fabric in Paducah, Kentucky located just across the Ohio River from Ft. Massac and the city of Metropolis, Illinois.

First a little about Ft. Massac and Metropolis before I take you to Paducah. Ft. Massac was built by the French in 1757 during the French and Indian War. After the war, the French abandoned the Fort and it was destroyed by the local Native American tribe. A new fort was built on the site to fight the British during the Revolutionary War by George Rogers Clark. I’ve written about Clark and the national monument located in Vincennes, Indiana that commemorates his life and achievements. Clark’s brother, William and Meriwether Lewis stopped here in the fall of 1803 on the way west to begin their expedition to the Pacific Coast. 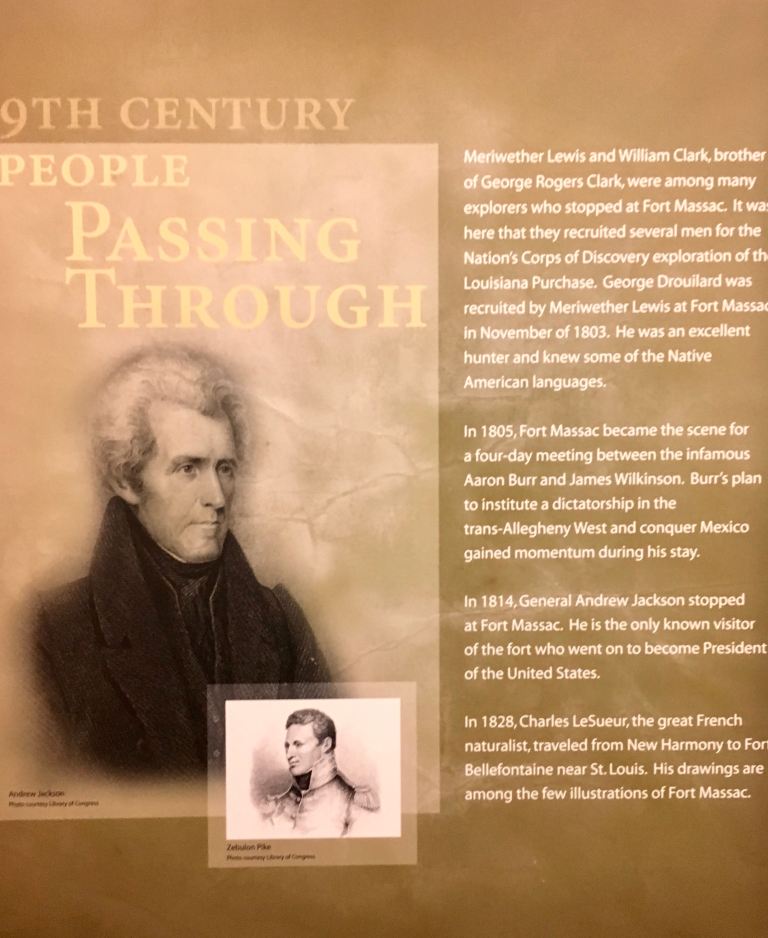 Fort Massac was decommissioned in 1814 and fell into disrepair and most of the usable materials were carted off for other uses. The site of Ft. Massac became Illinois’s first state park in 1908 and later a replica fort built to resemble how it might have looked in 1802. 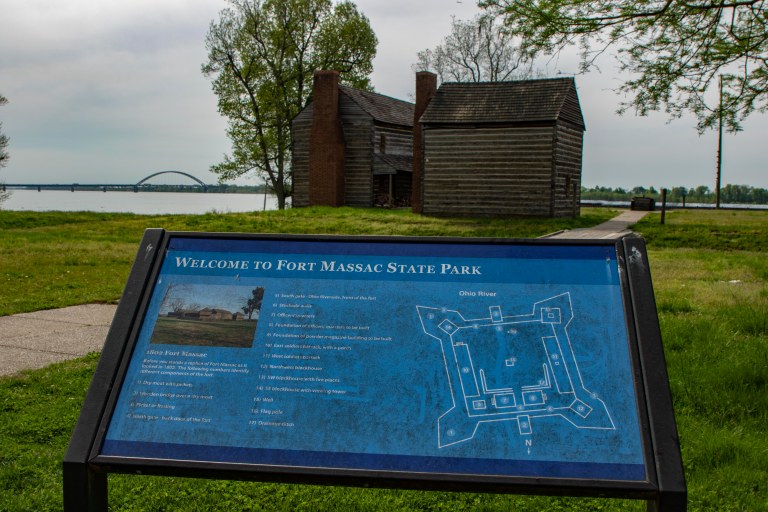 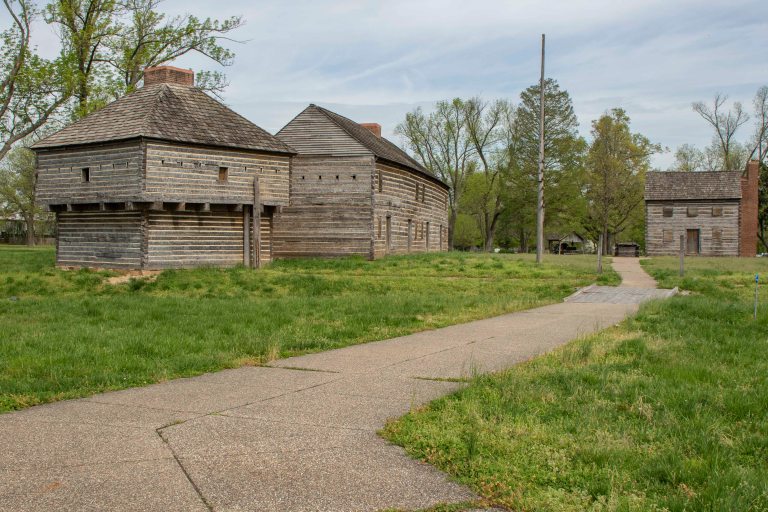 The campground is an excellent place to stay with a reasonable rate of $20 per night including electric. Plus there isn’t a park entrance fee so it’s very economical camping. Readers should know that the Ohio River is very high and has overflowed it’s banks into the park but not affecting the campground. The water has receded a bit but with all the rain and snow melt it’s going to the north it will be a while until water levels get back to normal. 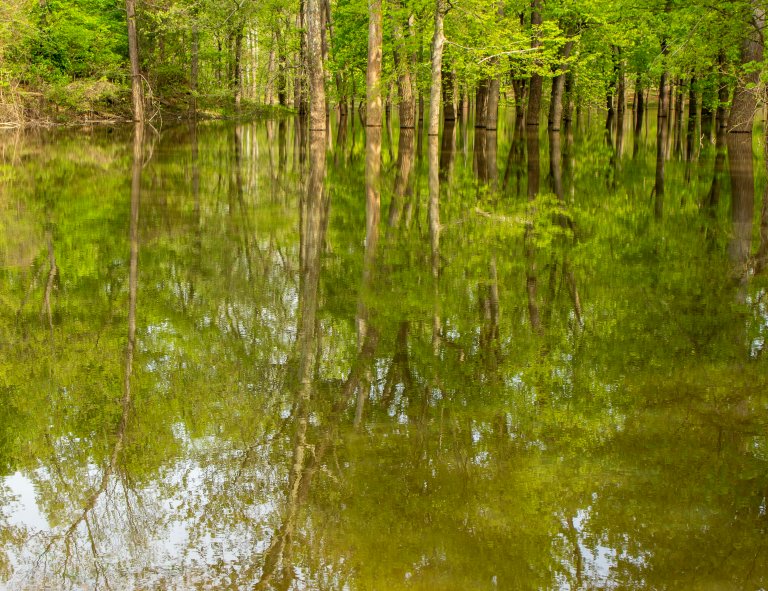 The barge traffic on the Ohio was moving pretty slow too as the water was too high for some barges to make it safely under the many bridges on the river. The barge in this photo had to wait at least overnight for it’s turn to head up stream. In the second photo, there were several barges moored on the river as they tried to make it down stream to the Gulf. 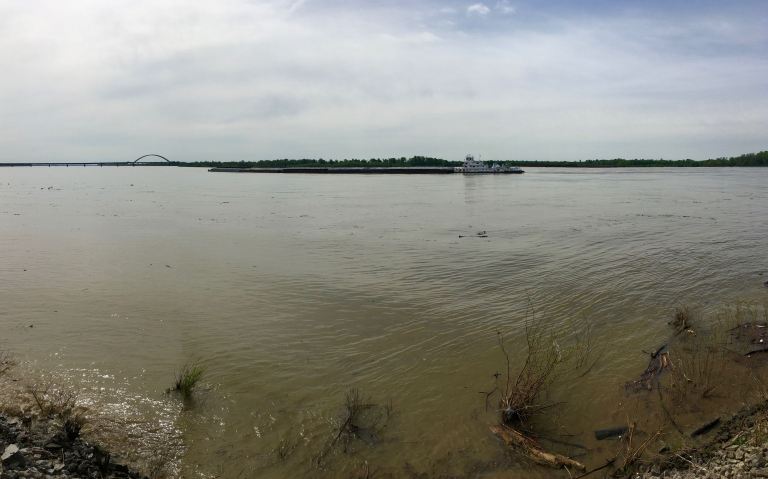 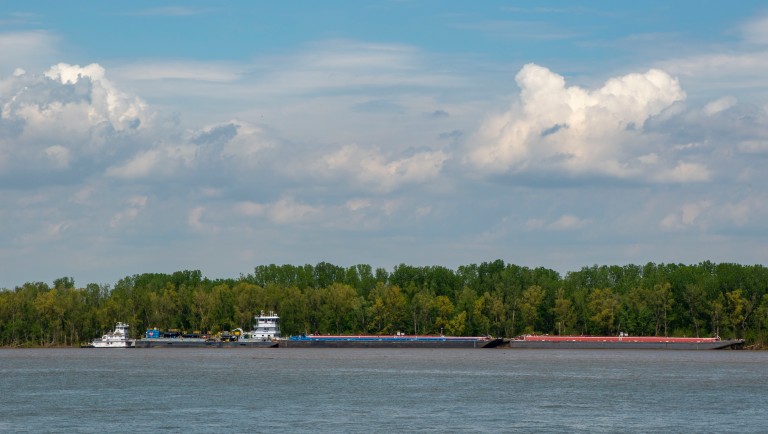 Ft. Massac State Park is just outside the city limits of Metropolis, IL that since 1972 is the adopted home of Superman! This 15 foot statue of Superman stands in front of the county courthouse overlooking downtown Metropolis, a city of about 6500 residents. 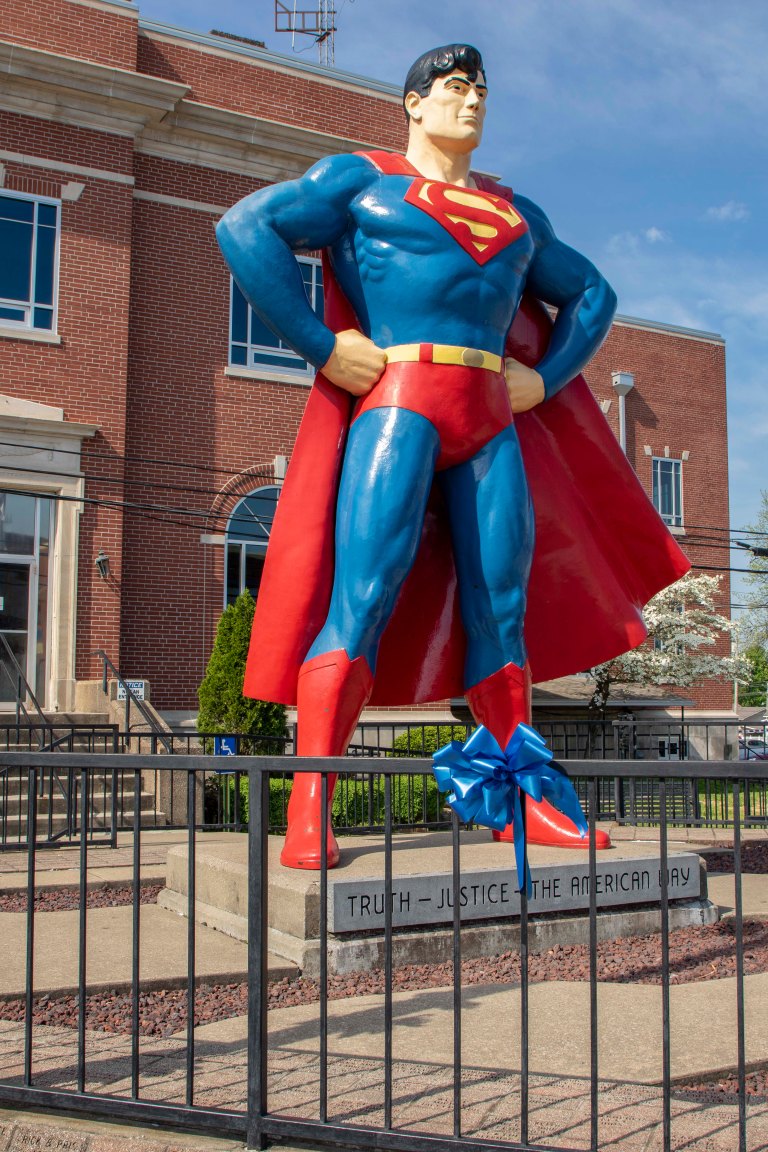 Nearby is a museum and store that sells all things Superman as well as paraphernalia related to other super heroes.

As I walk around downtown Metropolis, I notice just about every business connects somehow to Superman. I guess that’s because the area depends on tourism for much of it’s income. There are Superman events that draws in fans from around the world so I guess they have something going. Harrahs’s also has a riverboat casino docked in Metropolis that attracts visitors from a wide area.

As I’m heading back to my vehicle, I see this couple taking their selfie with Superman. I declined the urge for such a photo so I took one of them taking a photo!

It was quilt week in Paducah that brings in thousands of quilters from around the country. The hotels, restaurants and all the fabric stores are super busy. The biggest shop in town, Hancock’s, has a large parking lot and it was hard to find a place to park.

We stopped at the Kentucky visitor center to pick up a map and get some information about the Quilt Show and Paducah. Meet Gina, the manager of the visitor centers in the area. She was so friendly and helpful wanting to assist us in any way so we enjoyed our stay in the area, inviting us to come back to the fall quilt show when it’s not quite as busy as the spring show.

When asked, Gina recommended a number of good places to eat in downtown Paducah. She did caution us that the quilt ladies were in town so they’ll all be busy! One she said might not be quite as busy was the PBW (Paducah Beer Werks) in the old Greyhound bus station. Anything with beer in it’s name always attracts my attention so that’s where we had a delicious lunch and I must say, a nice draft beer! 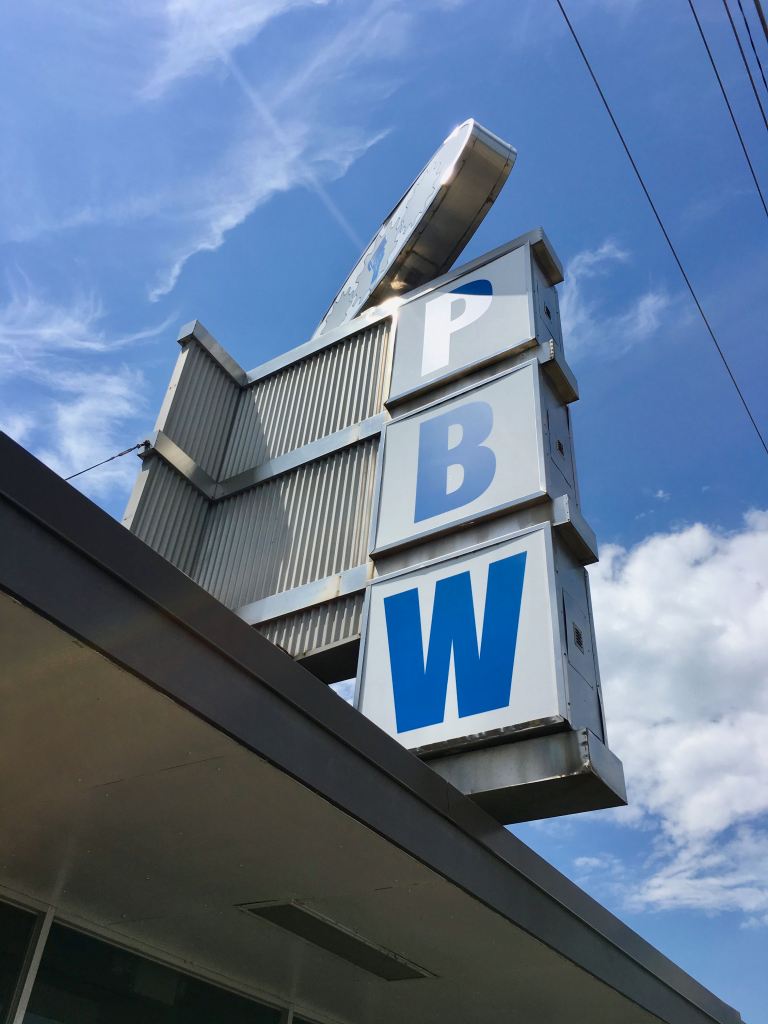 During Quilt Week there are a number of pop up fabric shops in some of the empty buildings around the downtown. It seemed that every nook and cranny had quilts or fabric for sale. And of course, my traveling partner did visit several during our short stay. 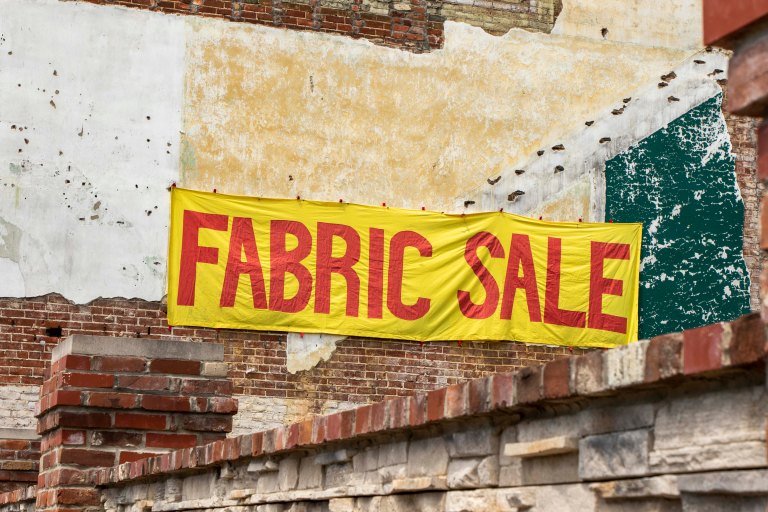 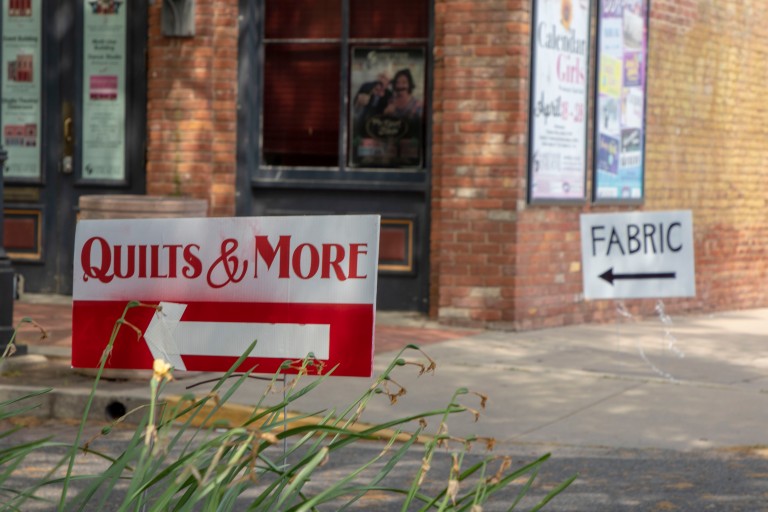 On Wednesday morning, I dropped off the aforementioned traveling partner at the Quilt Show entrance so she could see the quilts and do more shopping. 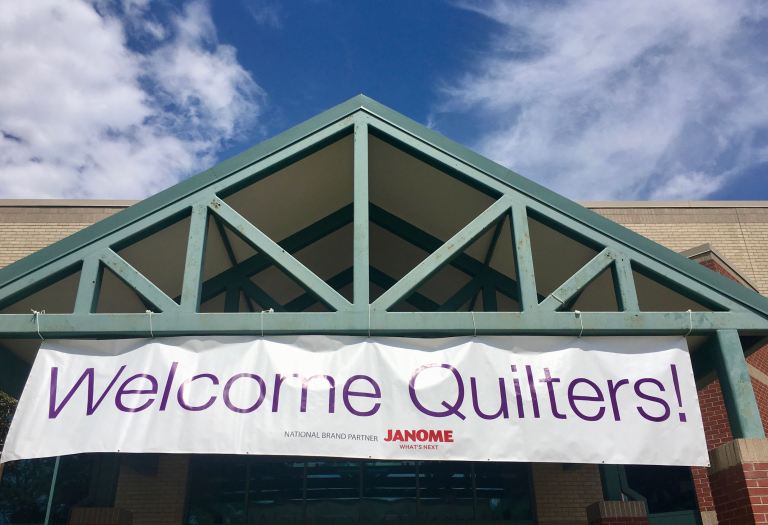 While she was bingeing on everything quilt, I entertained myself by walking around Paducah, seeing the sights and taking some photos. Near the Quilt Show pavilion is the National Quilt Museum. 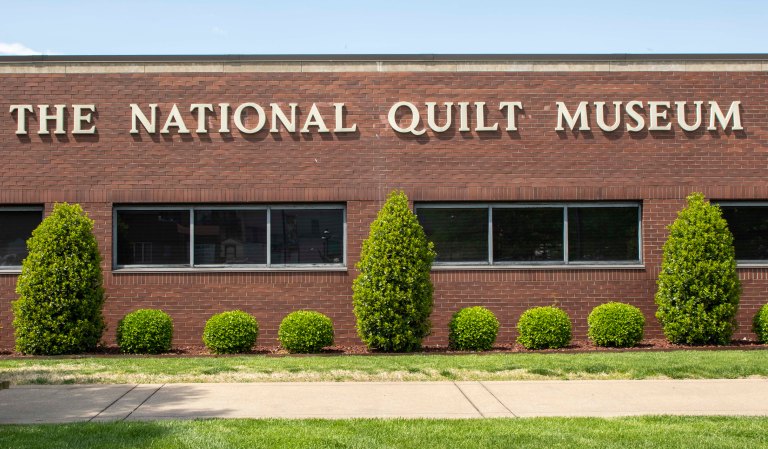 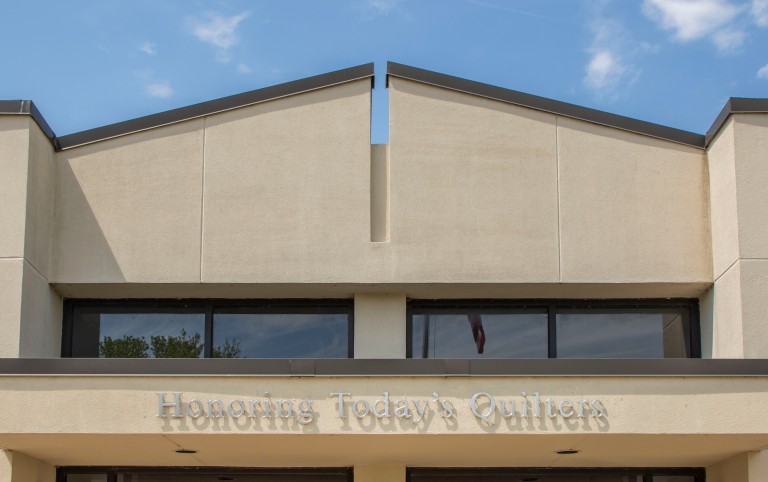 While I didn’t go inside, I did notice these bronze sculptures on the lawn outside the museum celebrating the Lewis and Clark Expedition. 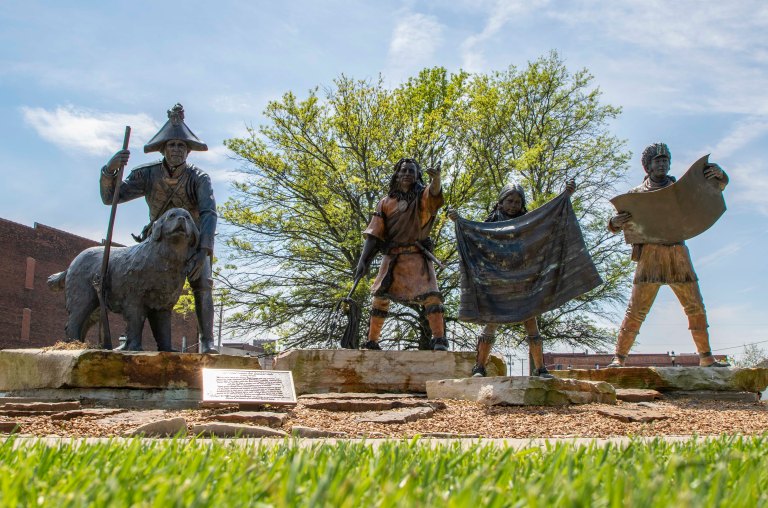 Down by the Ohio River on the flood wall facing the downtown are over 50 murals depicting the history of Paducah and the surrounding area. 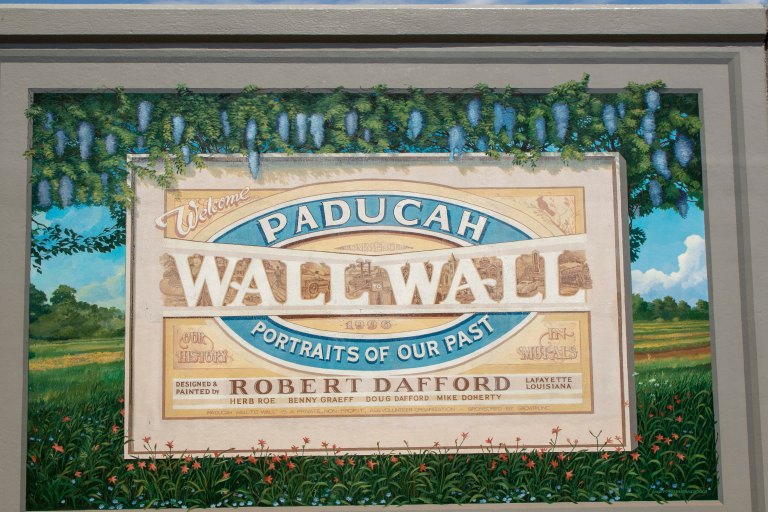 This photo depicts the many floods that have inundated the city, hence the flood wall was built by the Corps of Engineers to keep the city dry. This wall and levees protect and minimize the flood risk for city residents and the surrounding land. The flood wall was put to good use earlier this year as the water level rose due to heavy rains and spring run off. 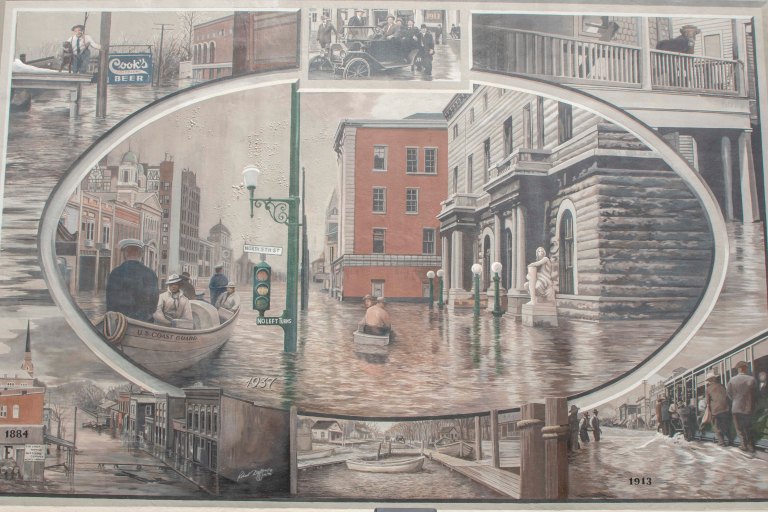 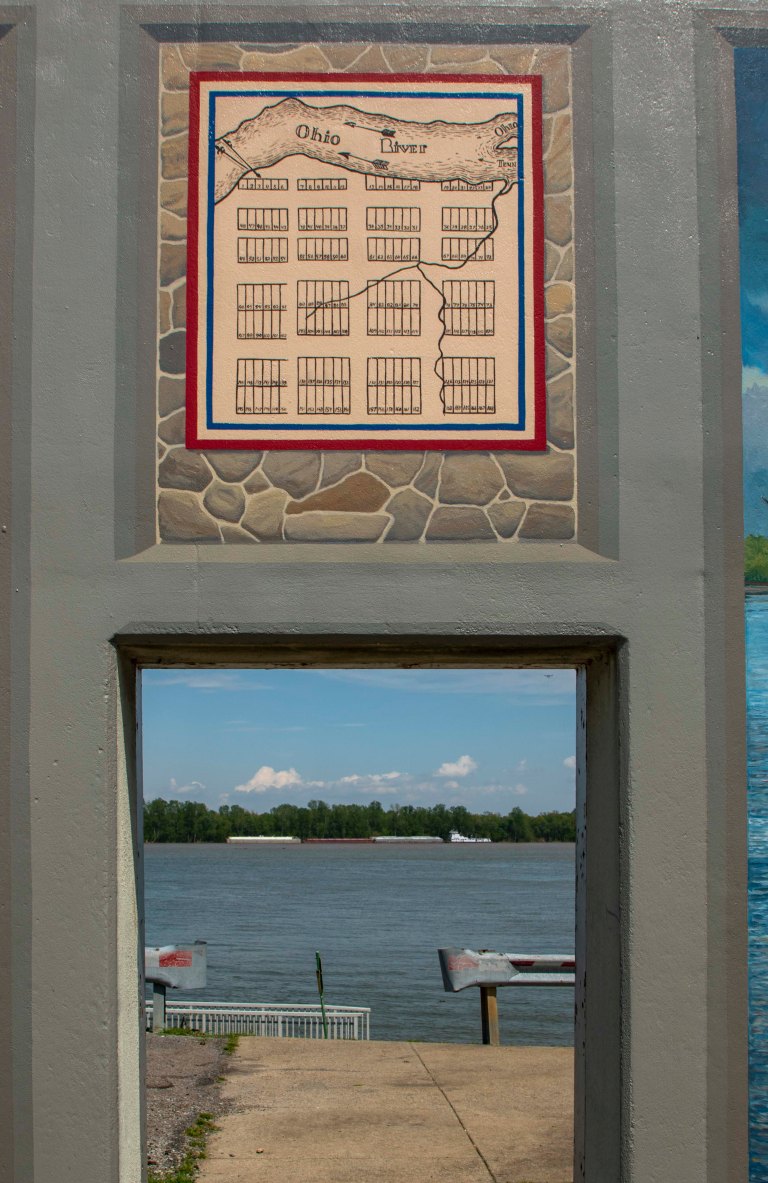 Near the murals I discovered these two plaques commemorating the selection of Paducah for an uranium enrichment plant in 1950. At one time it was the only operating plant enriching uranium in the US. The plant was closed down in 2013 and returned to the Department of Energy for decommissioning and cleanup.

Later on, I walked by this sign painted on the side of a building. When I showed this to my traveling partner, she told me that it was the Eleanor Burns line of patterns, fabric, accessories and quilting doodads. But my question: “Can you make a quilt in day? Never knew such a thing existed!!!” To which I received a stare that meant don’t say anything more or you’ll regret it! 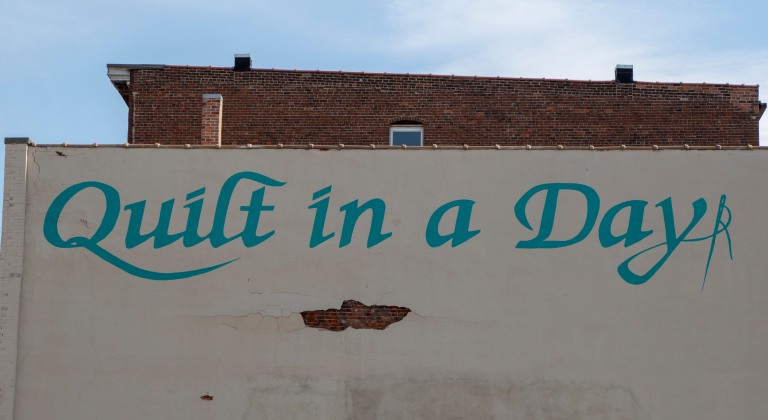 Unfortunately, our time here was up as we had to head south about 550 miles so we could pick up our son-in-law at the airport in New Orleans on Thursday evening. Learn more about that in my next post, The Trail to New Orleans – Part 2.