Welcome back to another episode from our recent excursion to Washington, DC. Thanks for the comments and feedback on the Night Tour post from last week, as always they are appreciated and help me to improve.

This week we are visiting the newest of the Smithsonian Museums in Washington, DC, the National Museum of African American History and Culture. Opening in 2016, this museum chronicles the African American experience from the 1500’s to current times, their suffering, their perserverance, and their triumphs. All I can say is WOW, it is mind blowing and as a caucasian American, quite revealing and sobering.

First, let’s talk a little about logistics. This museum was built on the National Mall with the address of 1400 Constitution Avenue, directly across the street from the Washington Monument. Even though it was cool and rainy, the crocuses were blooming.

A timed entry pass is required if you want to enter the museum before 1 PM weekdays when walk-up entry is permitted. The passes are available up to three months in advance and are issued the first Wednesday of every month. Same day online passes are released at 6:30 AM each day, if there are any available. That’s how we got our passes, at “0 dark thirty” the morning of our visit, I was able to secure two passes for 11:30 AM entry. You might ask why didn’t you just wait until 1 PM to enter, well that’s not guaranteed if there are big crowds and more importantly, to do this museum proper homage, it will take several hours. We left the museum at closing time, 5 PM, and we didn’t see everything! It takes time because there are a lot of people and a lot of exhibits and artifacts to see and absorb.

When approaching the museum, visitors notice its unusual shape and design. Called a corona that resembles a crown with patterns of intricate ironwork inspired by free and enslaved African Americans in Charleston and New Orleans. The three tiers express faith, hope and resiliency.

Here’s a view of the exterior ironwork from inside the museum. 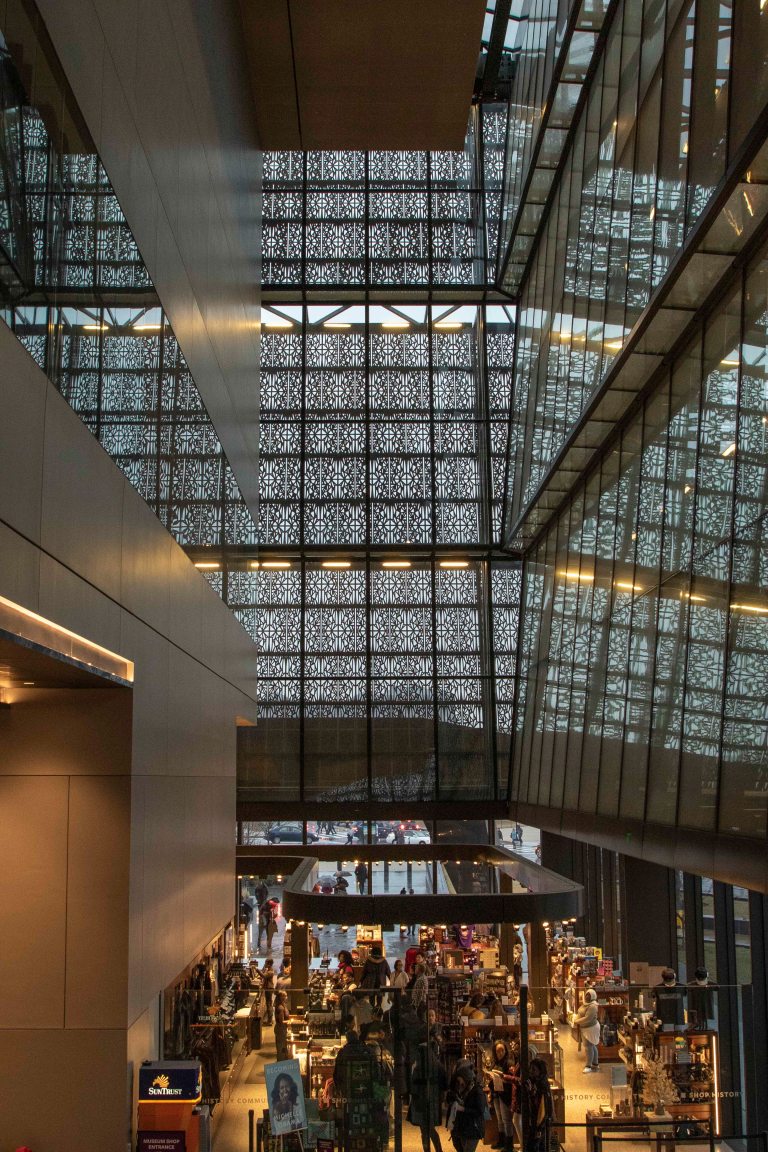 After entering the museum and stopping at the information desk, visitors are ushered towards an elevator that delivers them back in history three floors below ground level to begin their journey upward towards modern times. Even the elevator ride has deep meaning! We begin our journey through the museum in Africa starting in the 15th century. At that time, Africa was known to be a place with diverse peoples, places and cultures with an abundance of natural resources. Portugal first came to Africa looking for gold but instead found a lucrative business in capturing and trading slaves. They dominated the export of slaves for nearly 200 years when other nations such as the British and Spanish became the predominate traders until the early 1800’s. It’s estimated that between 9 and 11 million Africans were enslaved during this time.  Where did they all go? Actually, pretty much all over the world with the majority going to Europe, Asia and South America. It’s estimated that about 450,000 Africans ended up in the United States, many after spending time enslaved in the Caribbean. 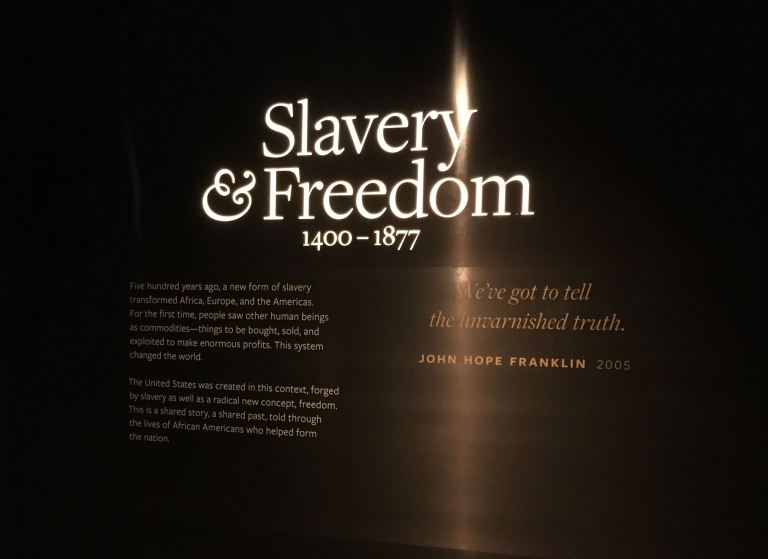 With those staggering figures in mind, we learn that the slave experience varied, some were field workers while others were domestic workers in small and large homes. Slave owners were also a diverse lot some considered benevolent while others were cruel and uncaring, subjecting their slaves to beatings and lynchings. As we progressed physically upward and mentally through the many layers of information we come to the beginning of our nation where enslaved peoples looked to the future for the hope of freedom.

Alas, that wasn’t come about until many years later when the Civil War broke out over the issue of slavery. This resulted in the Emancipation Proclamation issued by President Abraham Lincoln on January 1, 1863 declaring that the approximately 4 million African Americans held as slaves were free. Followed by the 13th Amendment to the Constitution ratified in 1865 that abolished slavery and involuntary servitude of any type.

Since we started our journey through time just before lunch, we decided to take a break to refuel before continuing on. A visit to the museum’s Sweet Home Cafe is a must. It adds to the rich cultural experience by offering homemade traditional and authentic foods as well present day classics. We passed up the fried chicken, sweet potatoes, collared greens and other goodies for the New Orleans style gumbo and corn bread. As a maker and connoisseur of gumbo, this recipe was was outstanding!

One of the observations we made during our visit was that nearly half the attendees at the museum appeared to be of African American descent as evidenced by this school group. Good for them and for all races to help us learn more about the African American diaspora and the struggles that continue today. Back on our journey through the museum, we arrived in the 50’s and 60’s when sentinel events happened such as the 1955 lynching of 14 year old Emmett Till for allegedly whistling at a white woman in Mississippi and the bombing of the 16th Street Baptist Church in Birmingham, Alabama killing four young girls attending Sunday school. These events precipitated action leading to the passage of the Civil Rights Act of 1964 enacted to desegregate schools and other public institutions and created the Equal Employment Opportunity Commission to oversee discrimination in employment. Next came the Voting Rights Act of 1965 that outlawed discrimination in voting, mainly of African Americans in the South. These two legislative landmarks helped to bring African Americans to the polls to elect their leaders and gave them legal options if discriminated against because of where they lived and/or worked.

One of the most somber exhibits in the museum was the original casket of Emmett Till. The long, slow moving line to enter the exhibit (no photography allowed) reminded me of lining up at a funeral visitation. People were quiet, orderly and reverent as they filed past the casket into a small room where videos of his life and death were shown. Truly a spiritual experience.

Near the end of the journey, we moved into modern times where the African American struggle continues on with income inequality, incarceration rates, education disparities and etc. There are some beacons of hope, the election of an African American president, the recent election of women of color to Congress and the racial diversity of candidates in the 2020 race for President.

After emerging from the three lower levels, there are more things to see on levels 2, 3, and 4. We focused most on level 4 that contained the culture galleries. There were exhibits by African American musicians, singers, actors, artists, photographers and more. I enjoyed viewing Chuck Berry’s red Cadillac; the video clips of James Brown: B.B. King playing his guitar, Lucille; and some of the intricate art work in the fiber arts. 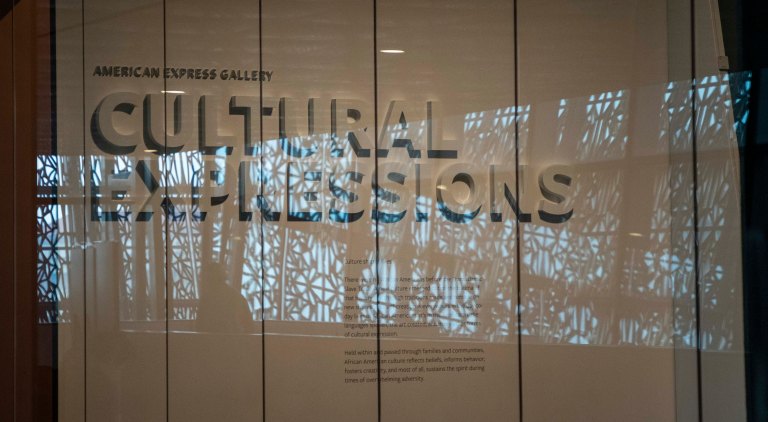 We ended our day in the Contemplative Court where water rains from the ceiling into a pool below. We relax on benches reading the quotes and listening to the calming sound of the water, thinking and mediating on what we just saw.

As I mentioned earlier, closing time came much too soon but we left with more things to see during a future visit. There’s a lot to see and do in Washington, DC but this museum should not be missed. Be sure to allow enough time, you won’t regret it! If you want to read more about the African American Museum check out the article in the October 2016 issue pages 116-139 of the National Geographic written by Michele Norris.

Next up, another Washington, DC museum, the Newseum.

2 thoughts on “National Museum of African American History and Culture”