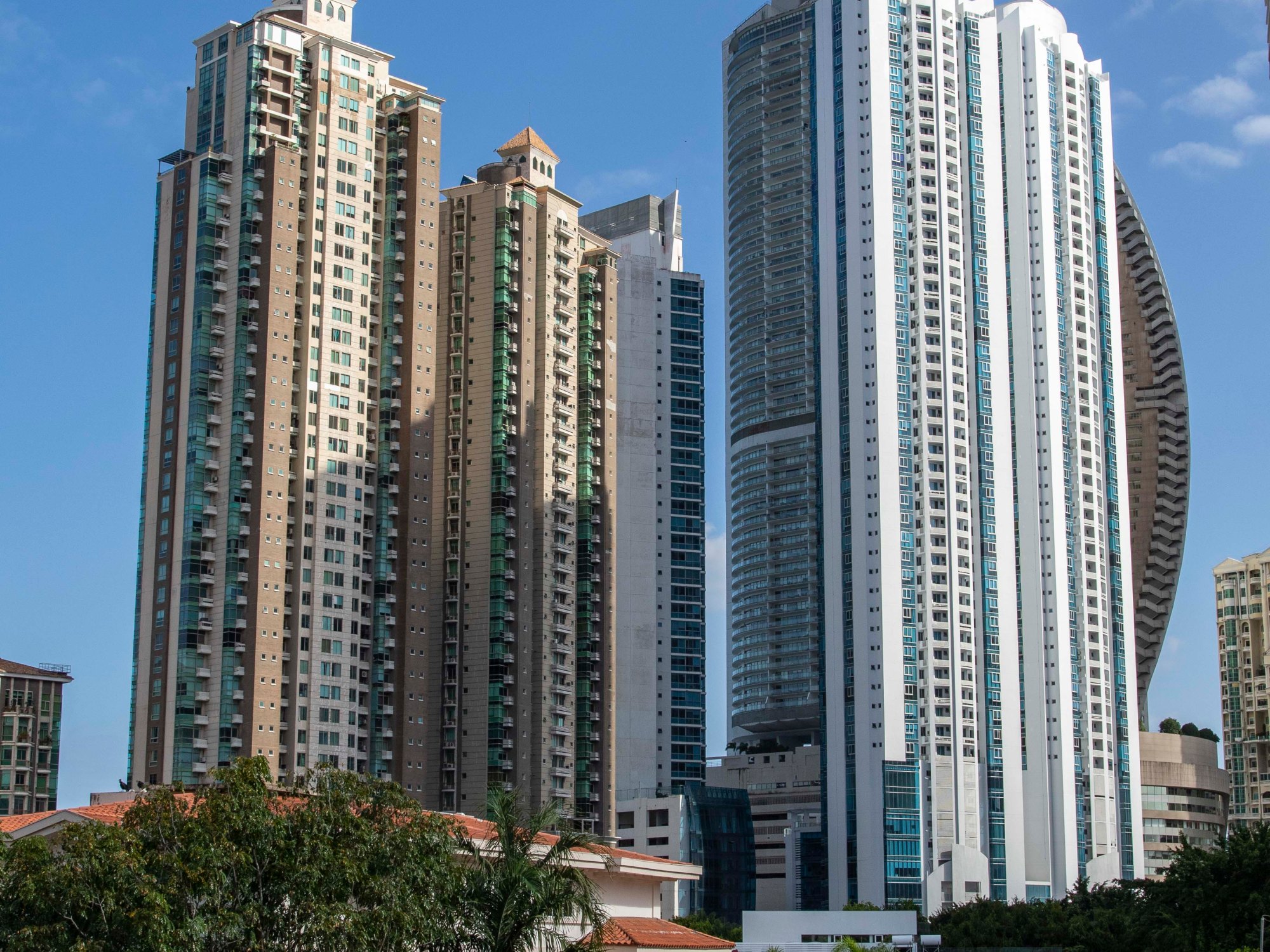 Last week I ended with a goodbye to our wonderful Road Scholar experience on the Panama Canal. It was then time for us to move over to our Panama City Airbnb rental for the next twelve days. But we had time to kill before we could check in so we stowed our bags at the hotel and headed out on to the streets of Panama City. Based on a recommendation from Rina, one of our Road Scholar guides, we ventured out the door to take the Panama Metro (a one line subway that opened in 2014) out to Albrook near the Canal where there is a huge mall. On our way over to the Metro station, we saw this church nearby and decided to check it out. 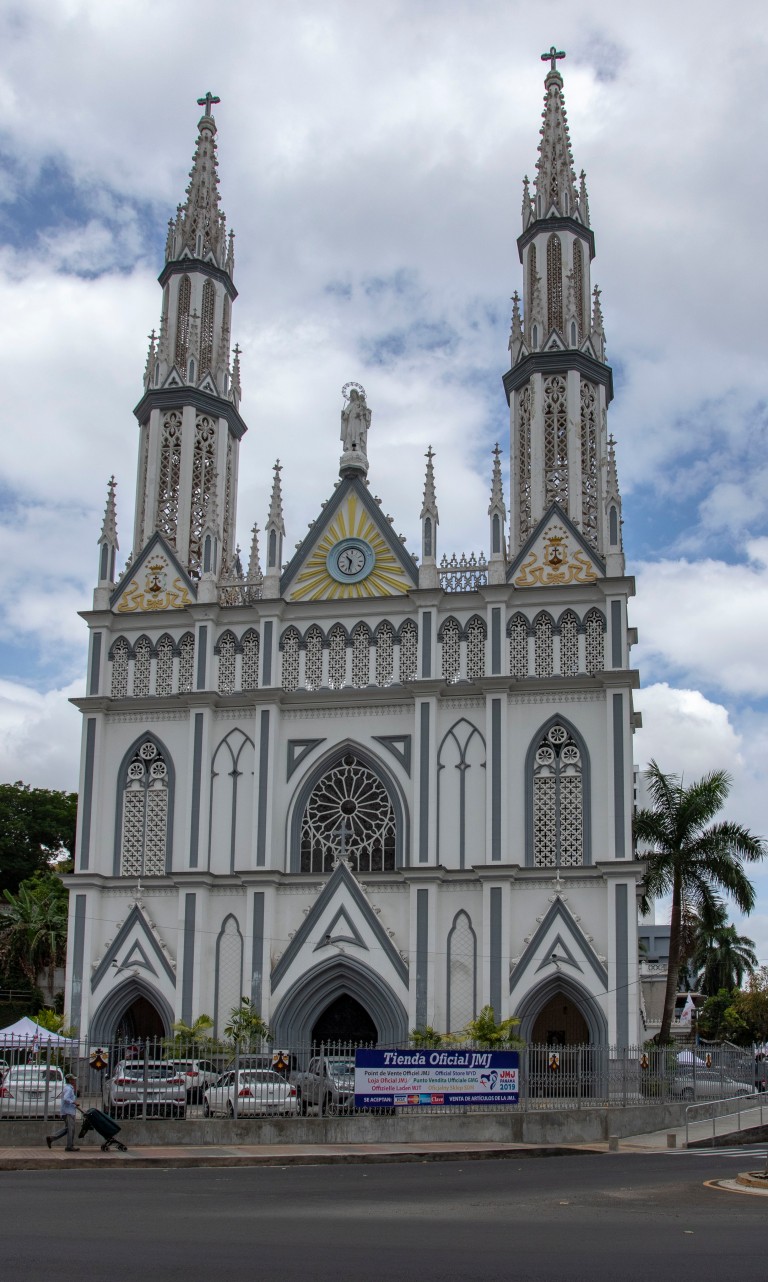 This is the Iglesia Nuestra Señora Del Carmen translated to the Church of Our Lady of Mount Carmen. Carmen is a Spanish derivative of Carmel. The Carmelites are a religious order dedicated to contemplation, prayers, community and service. This order is considered to be under the protection of the Blessed Virgin Mary and given the title of Our Lady of Mount Carmel. This church was built in the Gothic architectural style even though construction didn’t begin until 1947 and completed a few years later. The towers are said to elevate prayers of the people to heaven. While we were inside we did see visitors writing prayers on post-it notes supposedly to be elevated! 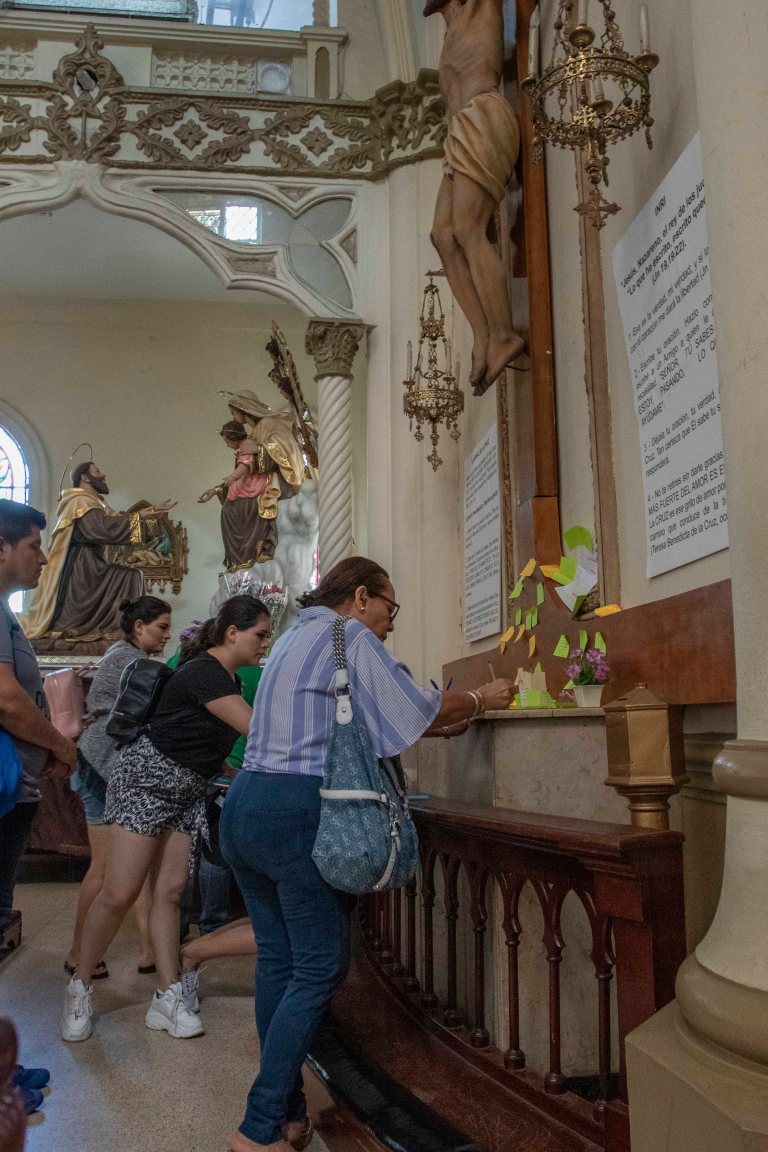 With that background, we entered the church and realized there were a lot of people. this was one of the many registration areas for the pilgrims attending the Catholic Church’s World Youth Day that was being held in Panama City. More on that later. Not only is the exterior quite stunning, the interior is equally as beautiful with an ornate alter and stained glass windows. 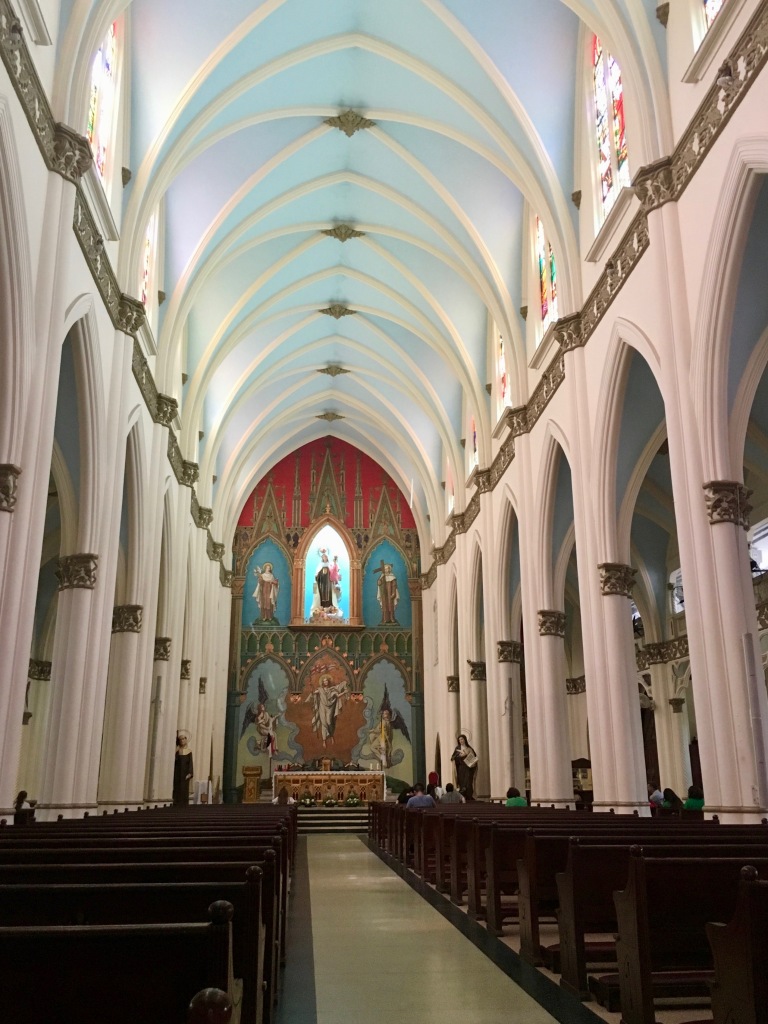 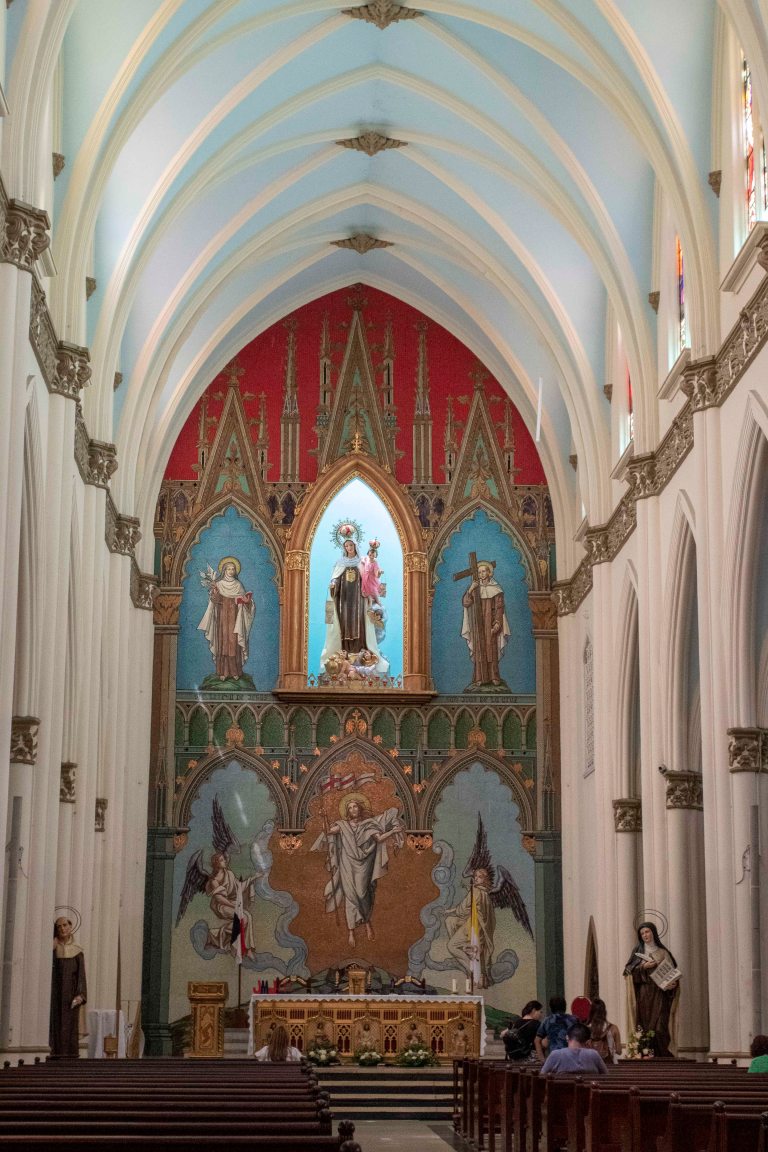 After admiring the church, we walked over to the Metro station, bought a couple of tickets with the help of a very patient security guard and headed down to the platform. With all the pilgrims in town for World Youth Day, the subway cars were quite crowded. My traveling partner scored a seat for the five stop ride when a younger person got up and gave the lady with mostly white hair her seat. Sometimes age does pay off! 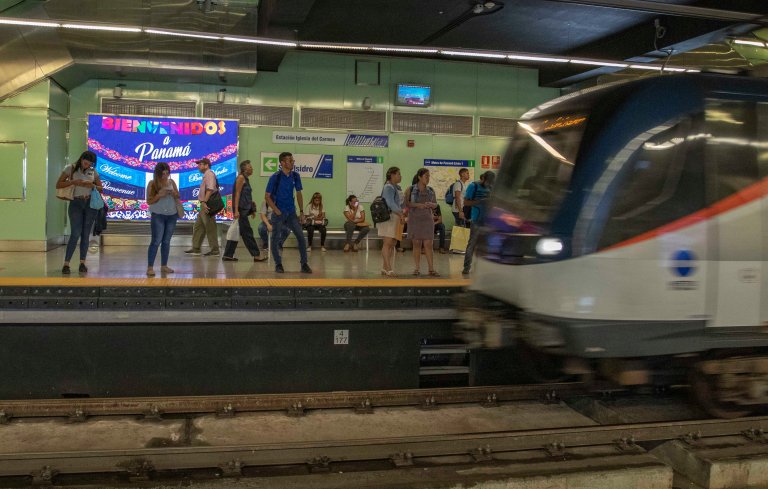 Albrook was the end of the line so everyone piled off the subway with most heading to the mall. The place was packed! Yes, it was a Saturday when most people are off work but we think it was a place for families to go to get out of the hot sun and into an air conditioned place. And do some shopping too! There was a very busy carousel and other sorts of entertainment in addition to three very busy food courts. 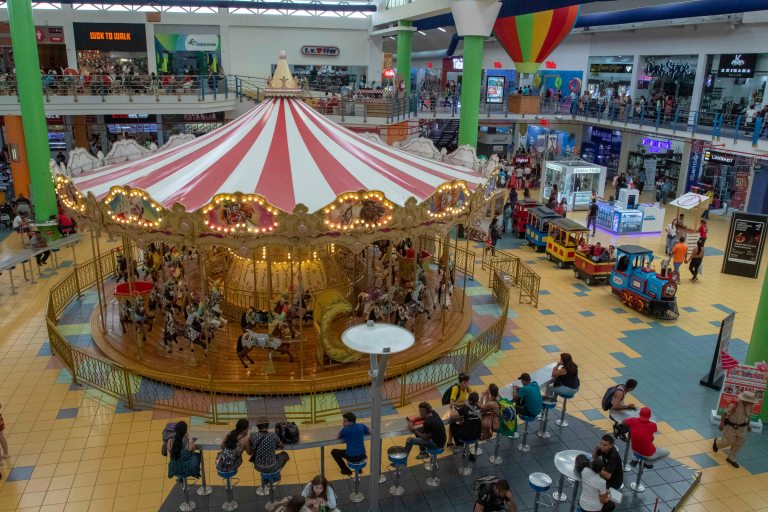 After enjoying some lunch and a little looking around, we took the subway back to near our hotel. Before retrieving our bags, we found a nearby grocery store and bought a few provisions for our stay at the apartment. The Rey is popular chain of supermarkets in Panama City, very equivalent to what we find back in the states. Even many of the same brands, I found my favorite cereal, Kashi go Lean on the shelves. The bottom photo was taken outside the store where there were all these stalls selling what I learned were lottery tickets. Not sure how it worked but it was a popular stopping off point for passersby. 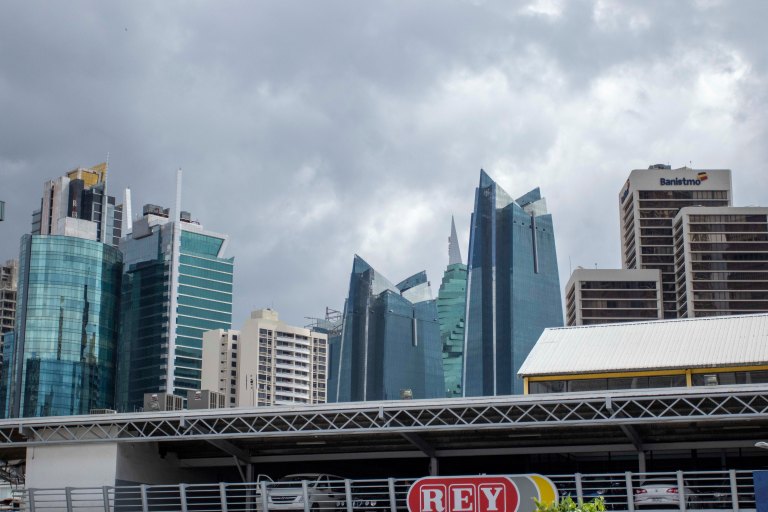 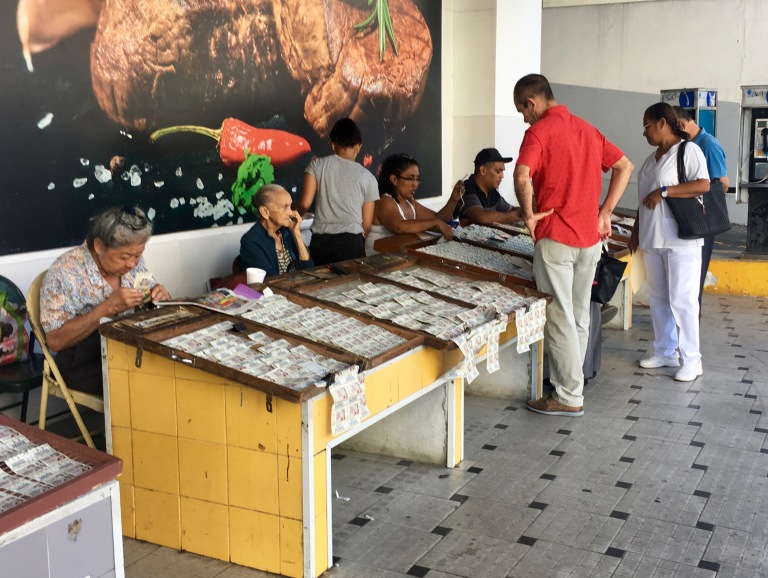 During our travels that day, I saw these two local guys supporting our home team, the Packers! 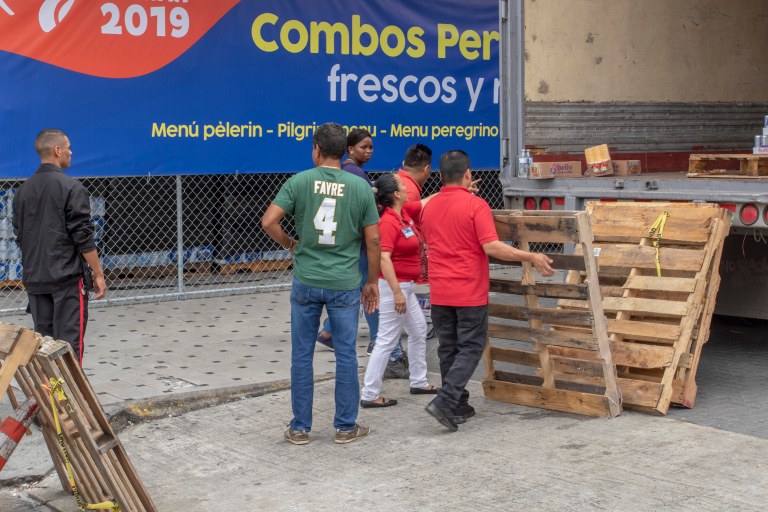 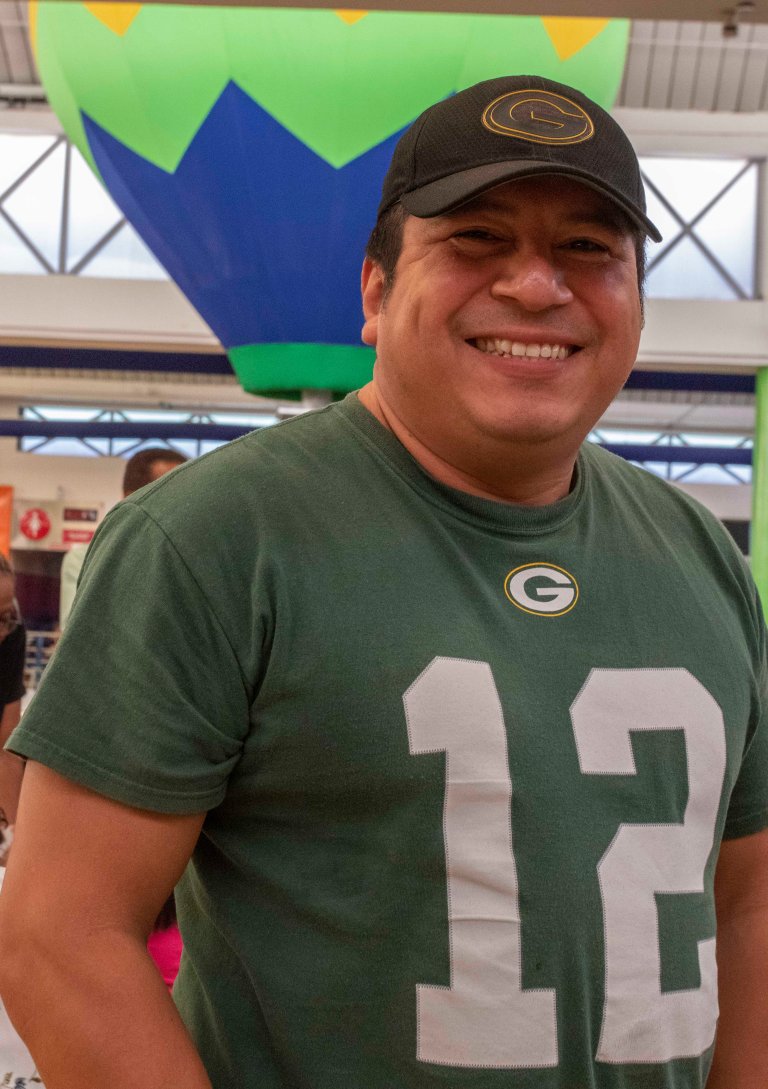 Panama City is a pretty cosmopolitan city compared to many others in Central America, kind of like Miami but with a few more tough neighborhoods. It has both a modern feel along with it’s historic Spanish past. In addition to the Panama Canal, the main industries are finance, banking and international trade. Tourism is also quite big supporting a lot of hotels, restaurants and attractions. Here’s a view of some the businesses and shopping on one of the main drags, Via Espana. 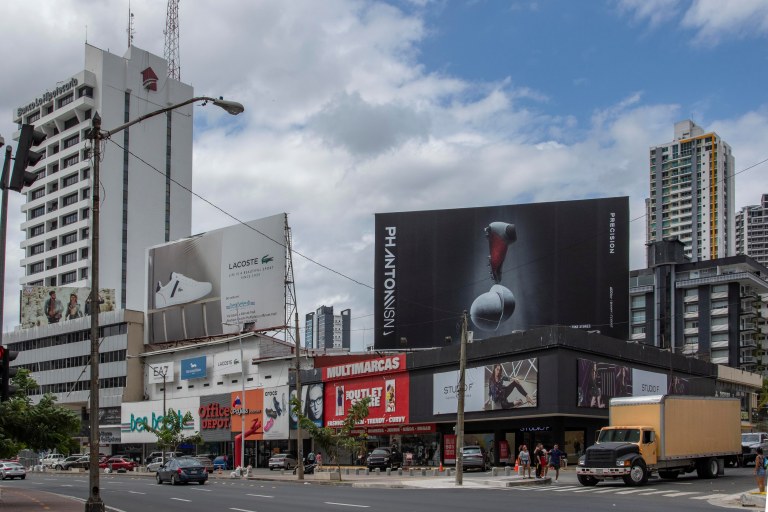 At the hotel, we asked about transportation over to our apartment. They had their driver give a ride for a small fee, $10 plus a tip! Our home for the next twelve days was located on Via Italia, in the Punta Paitilla area. Not sure why it was called Via Italia but it was easy for us to remember and easy for Uber drivers to find us. Our apartment was in the Posada del Rey building next to the Embassy of Columbia. Every large residential building appears to have around the clock security with some of the guards being armed. Ours were not but they monitored the door and cameras quite closely. Never felt unsafe while in the City. 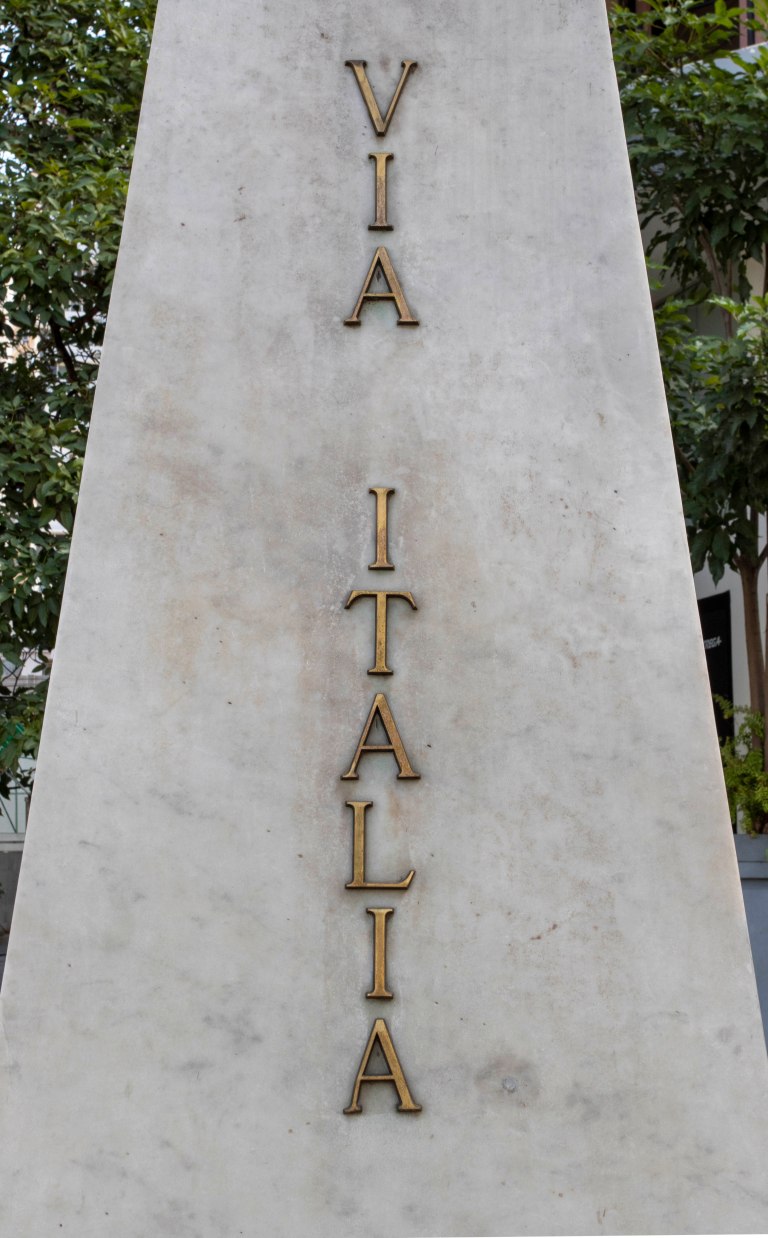 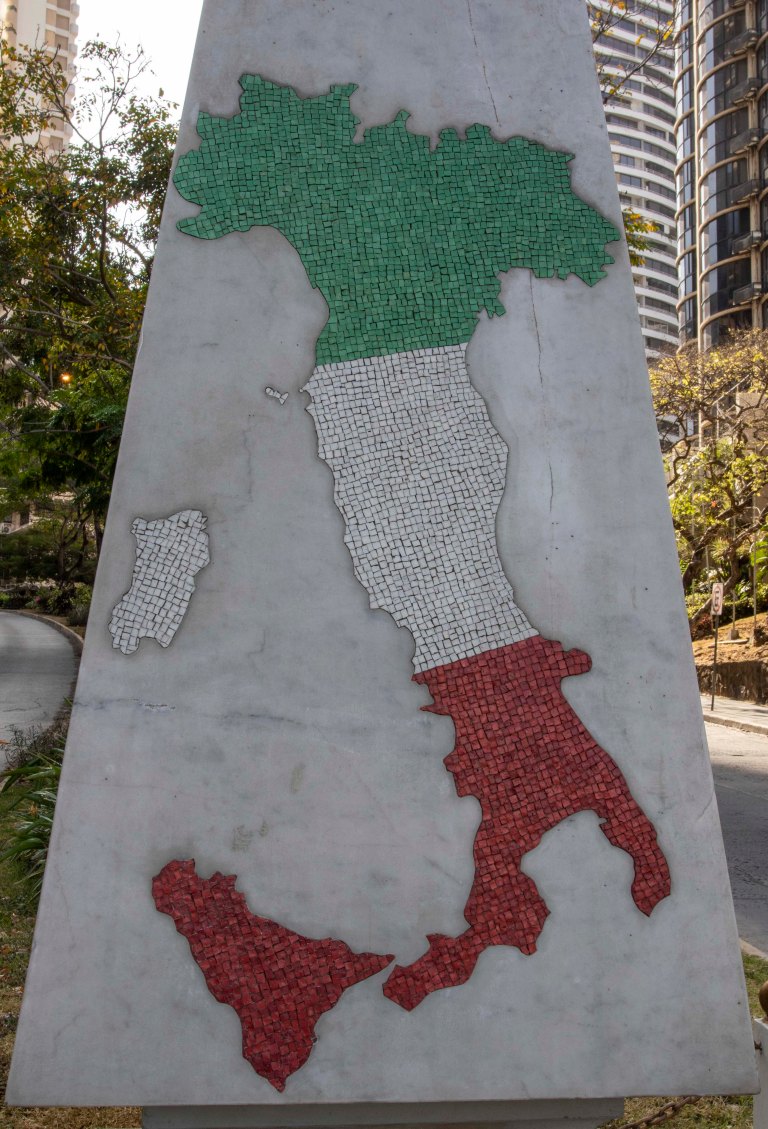 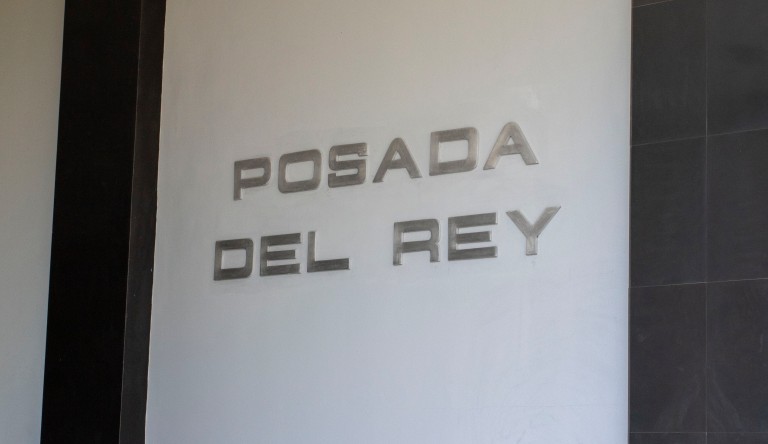 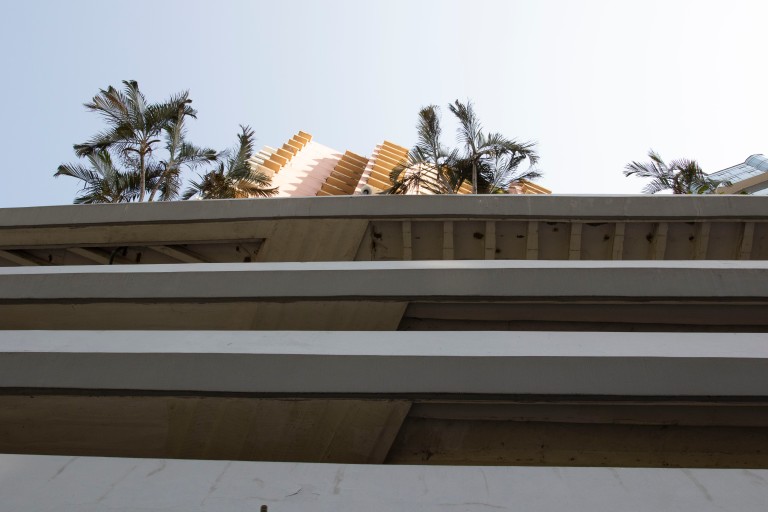 This photo shows our apartment, it’s the smaller pinkish building towards the center of the image. Note all the tall condos and apartment buildings in the area. The round building on the right side is a hotel. So we were in a pretty decent neighborhood. 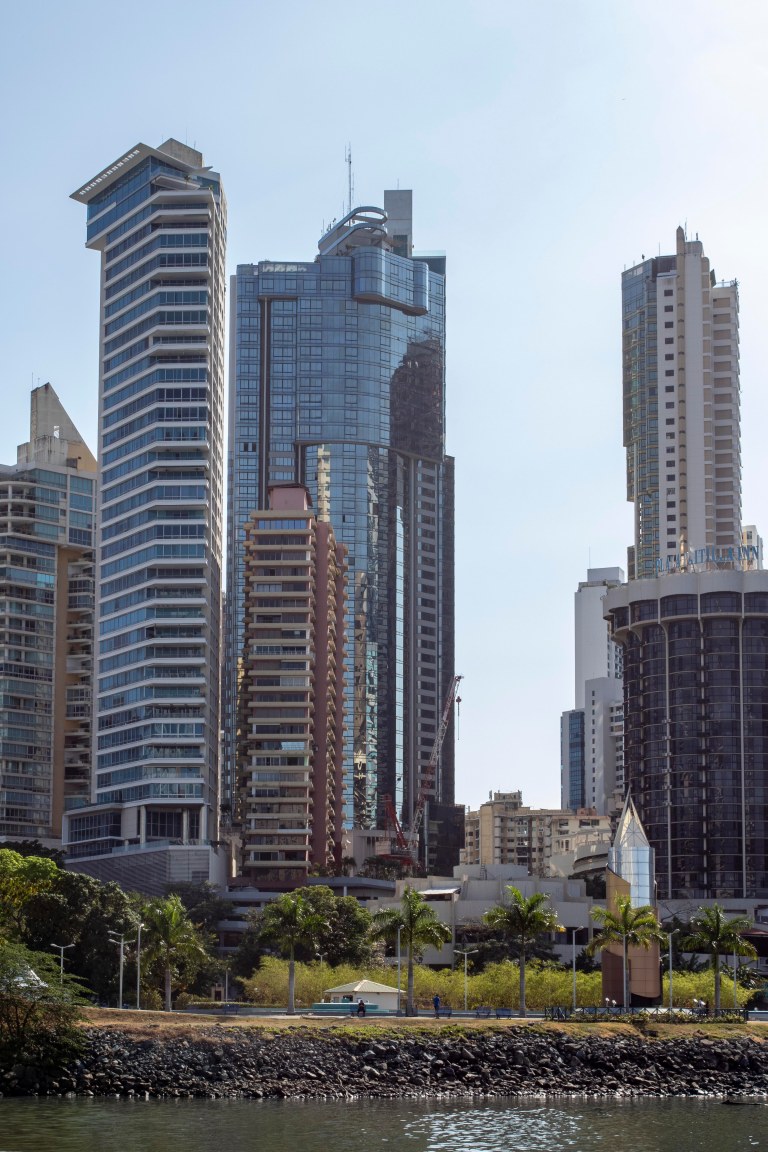 Here is the view from our apartment overlooking the Bay of Panama. Note the differences in the level of tide between the two photos. 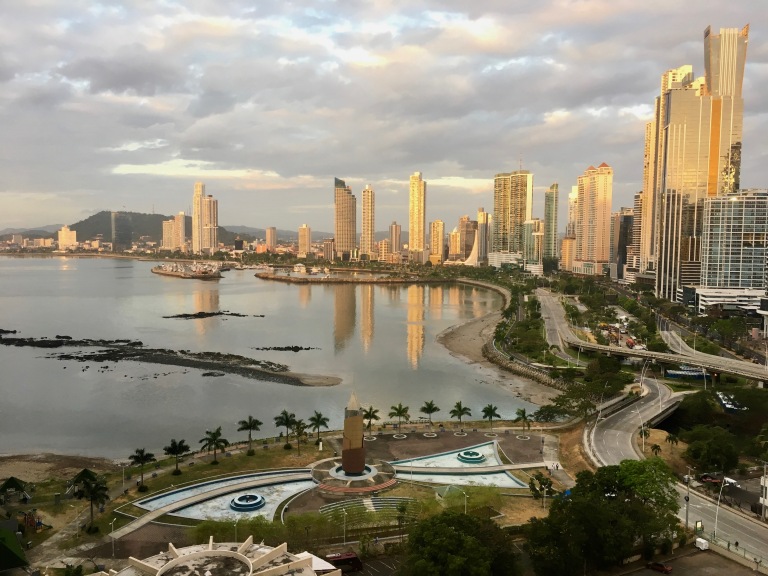 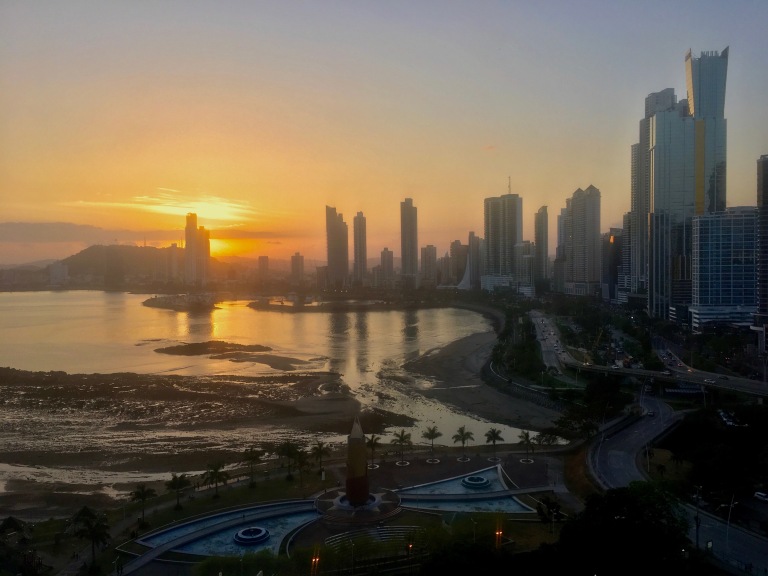 We noticed a number of buildings being built and rehabbed, lots of construction going in the neighborhood. Economy must be doing ok. 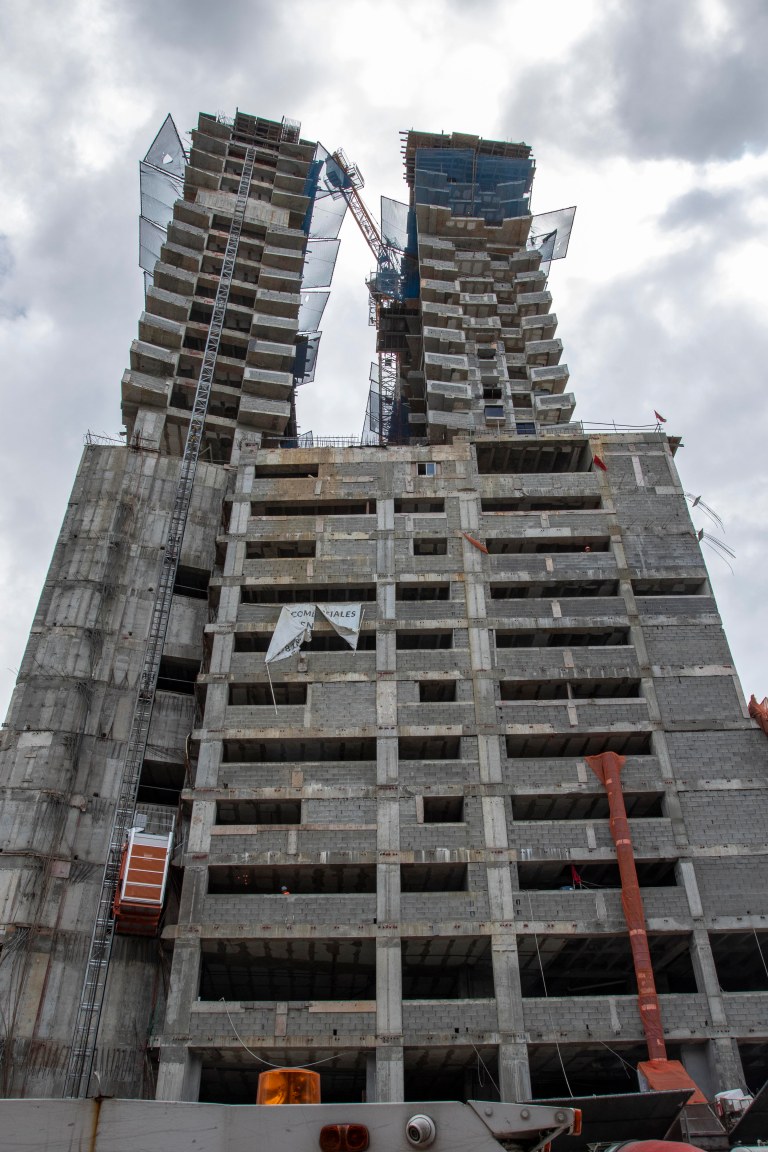 On one of our walks, I noticed these guys looking over the side of a building waiting for something to happen. 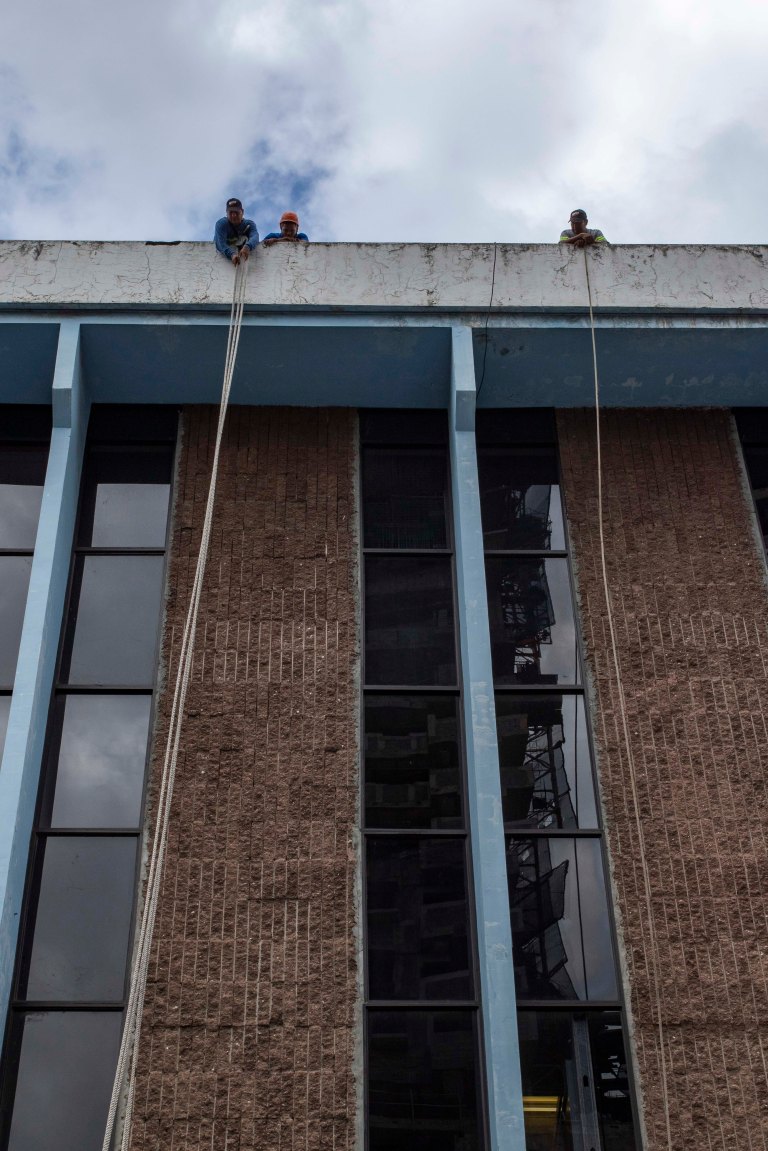 I mentioned that Panama City was hosting World Youth Day. When we arrived at the airport we saw this sign and weren’t sure what it meant. 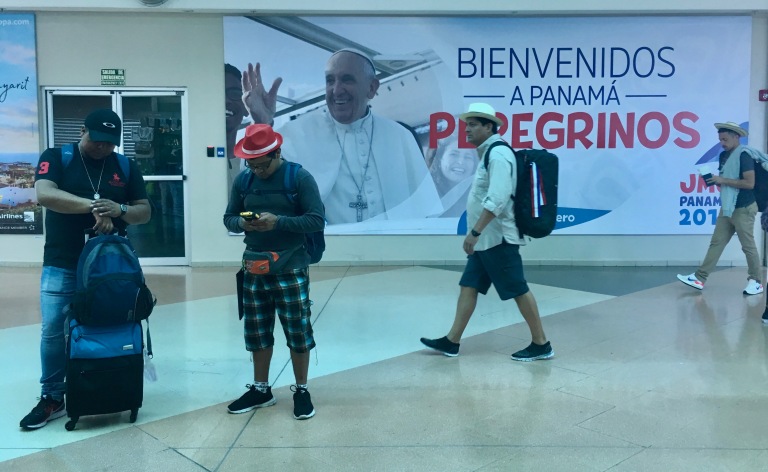 We quickly learned that this event was bringing in about 200,000 young people and their chaperones from around the world, about 150 countries were represented. And it also brought the Pope Francis who was treated like the rock star that he is. There were signs everywhere. I’ll share more in future posts about our experiences with this event. 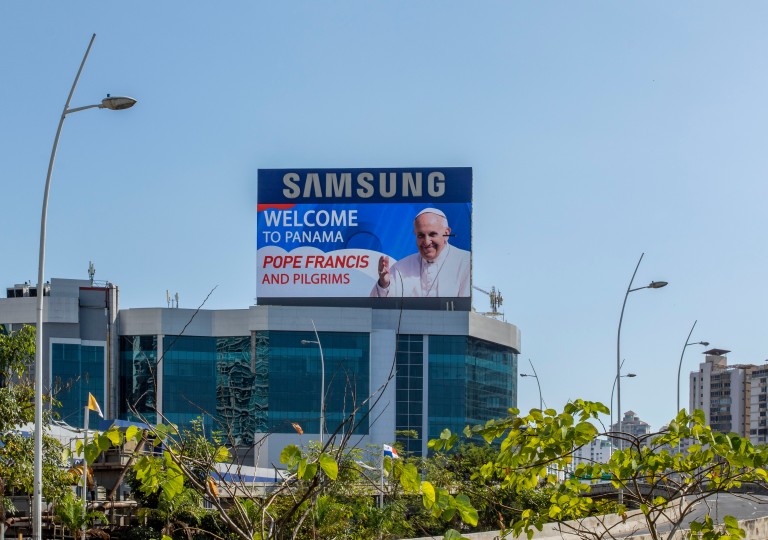 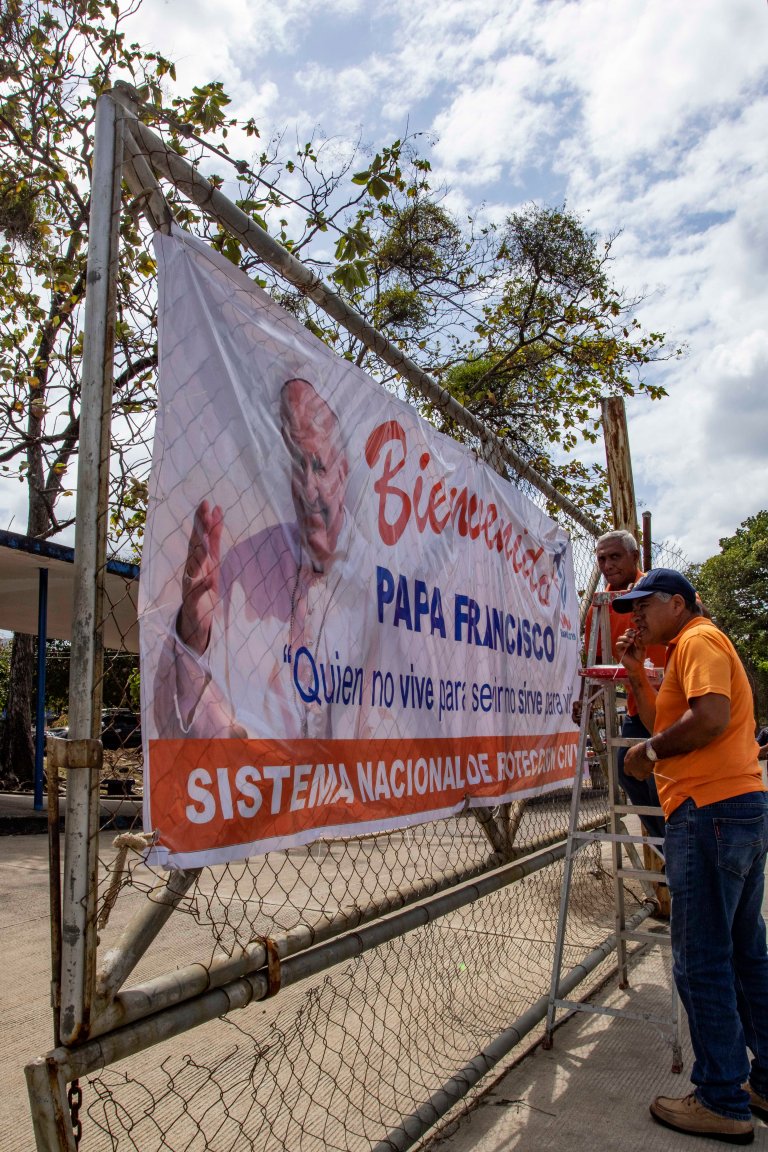 Earlier I mentioned Panama City is a modern city with pretty much all the conveniences of home. So we weren’t roughing it by any means. We could get a McDonald’s if we wanted, we didn’t! 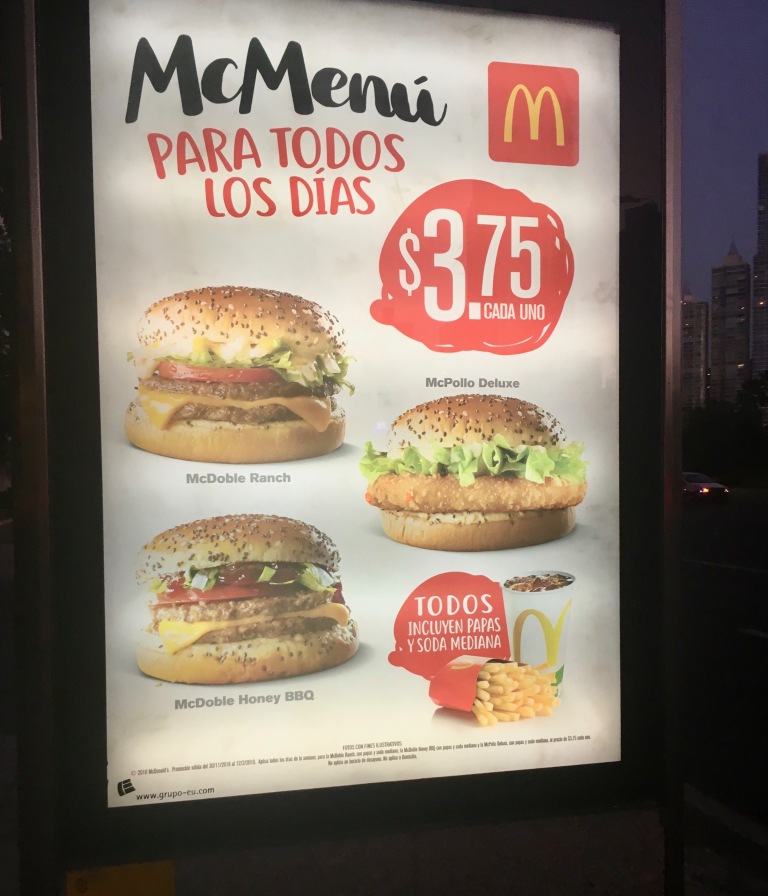 Or a Dunkin Donuts, we did! 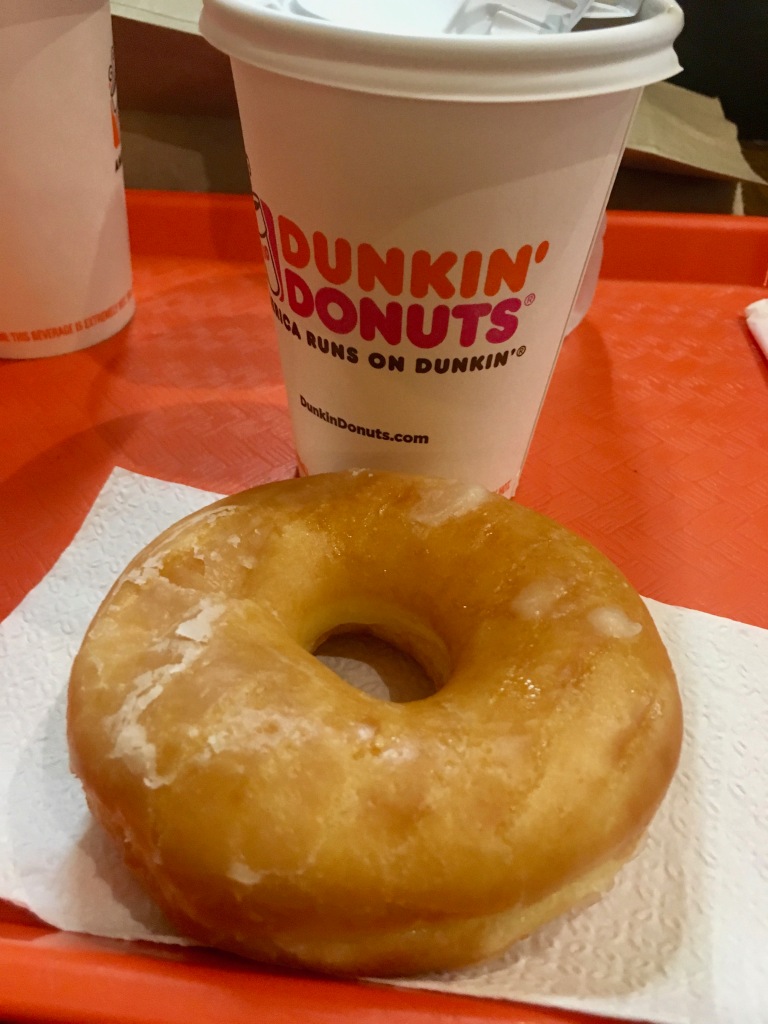 Or the more than occasional ice cream cone or gelato, we did! 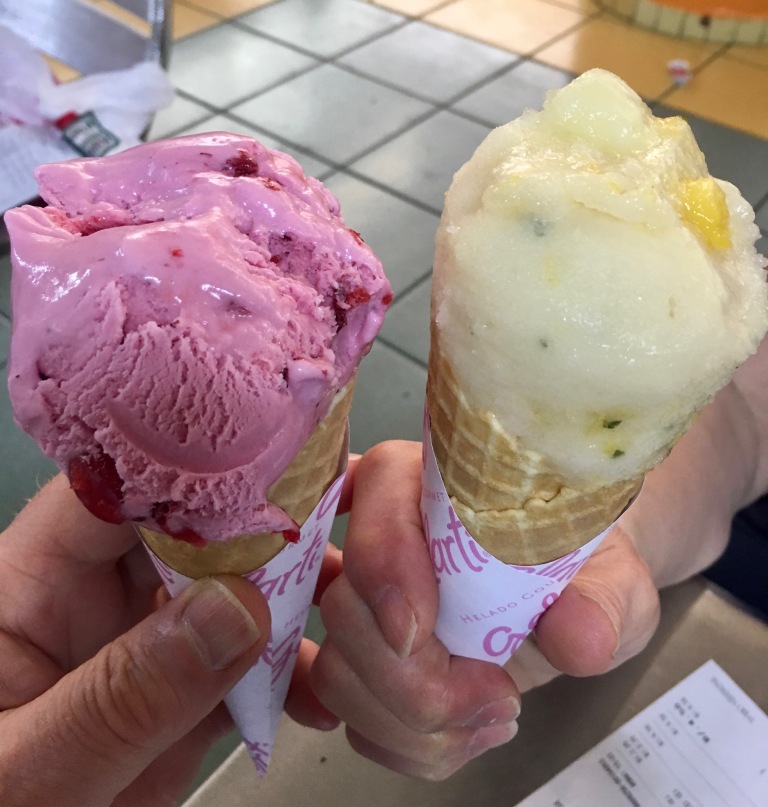 And a few times, sampled some very fine sangria! 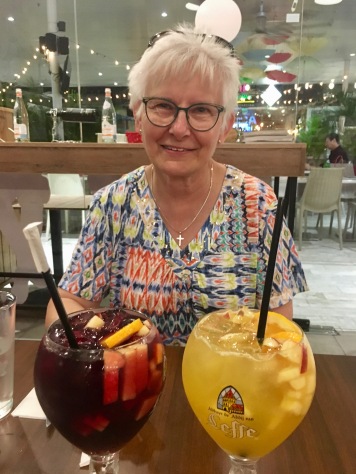 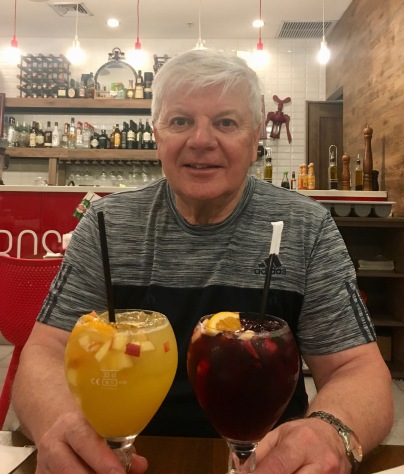 That will do if for this week. Next up Panama Viejo.

2 thoughts on “On Our Own In Panama City, Panama”