Let’s start our journey with a short poem by Warren Nelson, a native of the Bayfield/Madeline Island area:

“Over to Old LaPointe”

Ferry carry us over there;

We miss the boat back, we don’t care,

We’ll dance with the ghosts of old New France;

On the Shores of Old LaPointe.

It’s hard to explain the “feel” one gets after a couple of week on Madeline Island. Maybe it’s like that on all islands, although we lived for a time in Hawaii and I never got this sort of feeling. Then again, Oahu is a much larger island and Honolulu is a large city with a more dense population, it’s also warm all year round whereas Madeline Island is cool or cold about 8 months of the typical year. That might explain the estimated 2000 summer residents and about 300 year round residents. It was interesting to find out that the year long population hasn’t varied much over the years. It’s only the hardiest ones that dare over winter and risk isolation for a period of time when the ice is forming in the winter or melting in the spring and the ferry can’t makes its run.

Visitors get to Madeline Island almost exclusively by ferry from Bayfield, Wisconsin or small water craft from any point on Lake Superior. As we waited to board the ferry in Bayfield, a large delivery truck departed the ferry. It’s always satisfying to see that the ferry won’t sink under the weight of our F-150 and our 24 foot travel trailer!

Here are a couple of photos of the ferry leaving Bayfield for our 2.5 mile/20 minute journey across the bay and arriving at the dock at LaPointe. 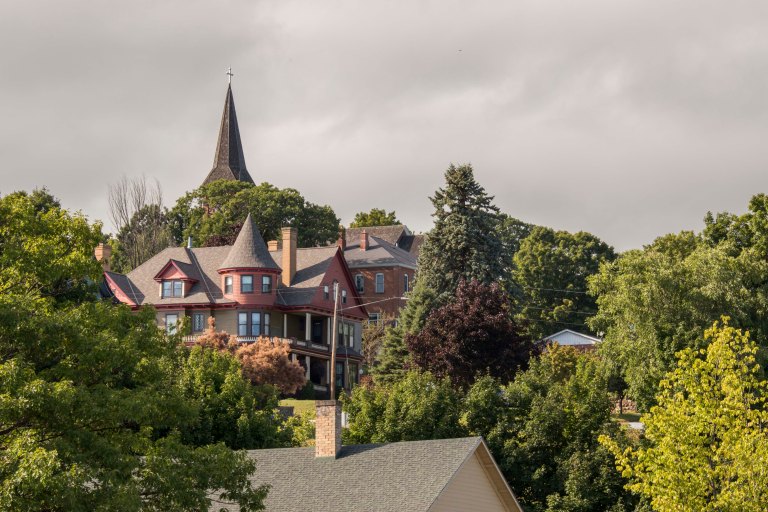 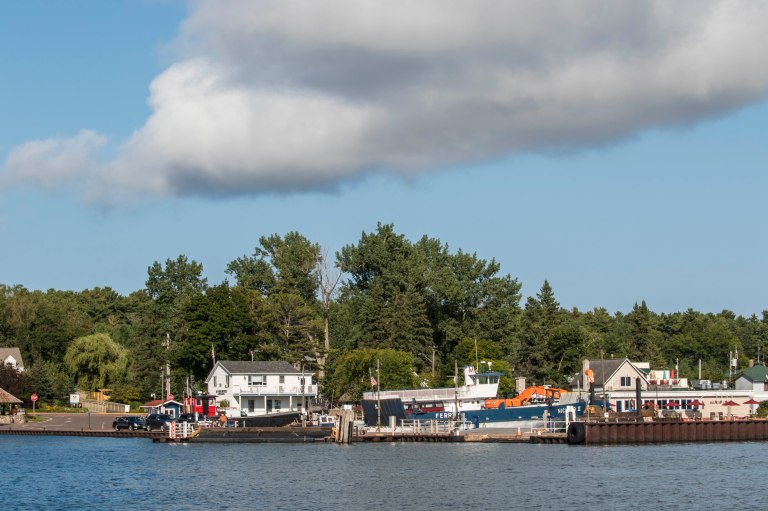 This was our neighbor on the ferry, I’m not sure if he was just happy or thinking about his next meal! 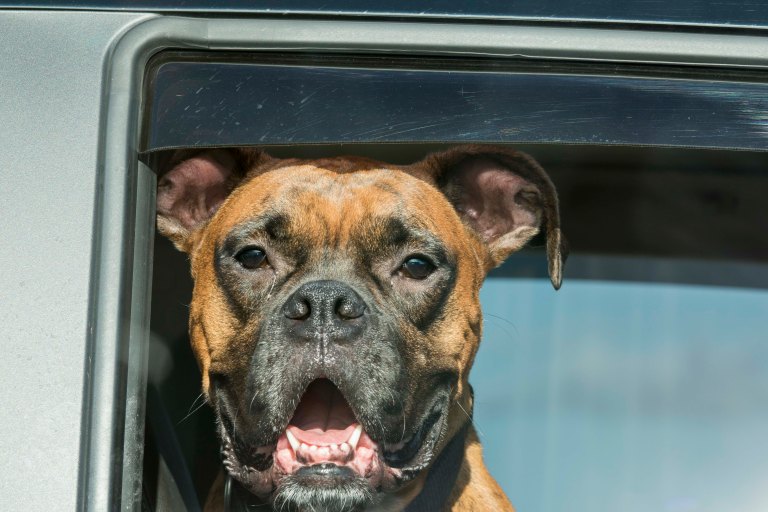 After driving off the ferry we drove through LaPointe, the only town on Madeline Island. There are a few gift and tourist shops, a couple of small grocery stores, a few restaurants and bars, a coffee shop, a bike and moped rental place, the marina and a Post Office.

LaPointe also is home to the excellent Madeline Island Museum that is run by the Wisconsin State Historical Society. We spent a couple of fun hours exploring the museum on a cool, rainy day and learned more about the history of the Island and it’s people. It is said the Ojibway Indians were present on the Island in about 1490 and according to legend they fled when the first white men, French explorers and traders arrived in about 1610. By the 1670’s, voyageurs were reported to have built a stockade or small fort on Madeline Island and by 1693 there was a trading post established. It’s hard for us to understand but there were residents on Madeline Island and in LaPointe at the time of the presidency of George Washington and before there was a recognized Northwest Territories. LaPointe, at one time, was the headquarters for John Jacob Astor’s American Fur Company. Later came European settlers, some establishing small farms while others worked in the commercial fishing, shipping, logging industries and the mining of brownstone from the many quarries scattered throughout the Apostle Islands. At one time there were 36 farms on the Island averaging about 90 acres each but the soil was thin and therefore couldn’t support intensive, profitable agriculture. Since the 1950’s, tourism has been the main industry on Madeline Island. It was said that visitors came to Madeline Island because it was free of malaria and a good place to recover from hay fever. Not sure if these claims were true or just good marketing!

In 1898, a successful livestock auctioneer from Nebraska, Colonel Fred Woods, came to Madeline Island for a vacation and to take care of his allergies. He became enamored by the Island and soon bought land on the water and build a home that is to this day is named Nebraska Row. He enticed others from Nebraska to join him and soon there was a lot of travel between eastern Nebraska and Madeline Island. Woods also had the first power boat, appropriately named the “Nebraska,” to be owned in LaPointe. Woods and his boat became competitors to the local ferry boats from Bayfield.

There is an interesting history involving county seats of government and courthouses in the area. Even though LaPointe was closest to Bayfield that at one time was the county seat of Bayfield County, a dispute let to Lapointe aligning with Ashland County. Furthermore, LaPointe at one time was the county seat for LaPointe County, later Ashland County but the courthouse was moved to Ashland, I think because it was easier to access than Madeline Island. As it turned out the courthouse that was in Bayfield was later moved to Washburn about 12 miles down the road. Whoever said there wasn’t major conflicts in the “old days” was totally mistaken!

You might be asking yourself where I got my information. Well, that’s easy, LaPointe has a great year round library staffed by locals who are very accommodating and tolerant of visitors asking questions. On our first full day on the Island, we stopped by the library mostly because they have free wifi! We asked if we could check materials out of the library, “of course!” they said and promptly issued us a library card. Then I asked about some the local folklore and they quickly recommended a number of books that I checked to learn more about the history and settlement of the Island. Some of the books titles were: On the Rock (as it’s often called by locals) by Michael Goc (1997); LaPointe: Village Outpost by Hamilton Nelson Ross (1960): and On Thin Ice by Charles Nelson (2001). I also read a fun book by Pat Spaulding titled “On Island Time” that told her story about coming to the Island and eventually building a second home.

One time when we were at the library, I was chatting with one of the librarians who told me about the attempts to bring houses from the mainland to the Island across the ice. From what I could gather (there were a number of versions of this story) that the first house was being towed across the ice by a tow truck when the truck broke through the ice taking the house down with it! It is said the second and third houses made it across on the ice road successfully after they waited for the ice to thicken. They told me there was a large crowd of people on the Bayfield side watching that were greatly entertained by this event! Another version is that the first house went through then they waited until spring to bring the others across on a barge. Lots of stories about experiences on the “ice road” that is created after the ice freezes between Bayfield and LaPointe. For the first time in recent memory. the last two years there was no ice road because of the mild winter conditions.

In one of the above mentioned books, I read a short notice that appeared in the Bayfield County Press I thought was kind of funny in it’s own way. It read: “1878, Gus Cadotte traveling from Madeline Island to Bayfield with a sack of potatoes, falls through the ice. The potatoes are drowned and it’s a close call for Gus!” Another funny story, there was a car ferry that later became a logging vessel, it’s name was “Nichevo” that is said to mean in Russian, “Wot th’ hell!” One more funny story, for awhile there was a bumper sticker circulating around the Island; “Madeline Island, Summer People, Some Are Not!”

One evening we attended a lecture at the Museum given by Bob Mackreth, a retired historian with the National Park Service. The title of his talk was “The Lake is the Boss” where he described some of the many incidents that boaters, sailors, and fishermen had on Lake Superior. While most survived the fierce conditions that the Lake can produce, some did not. He also talked about some of the rescues by ice sled of people ice fishing and found themselves on a floe drifting out to the open waters of Lake Superior. Not only were the fishermen at risk but so were the rescue squads running the ice sled.

There are other points of interest as one learns more about the Island. There are two churches one Catholic and the other United Church of Christ. These churches are some of the oldest in this part of the country. Here are a few photos of those churches.

Joni’s Beach is a popular place to watch the sunset and for visitors to enjoy sunning themselves on the beach.

A short drive from LaPointe (it’s a short drive to everyplace on the Island!) takes visitors to the Big Bay Town Park where there is a campground, picnic shelter, canoe and kayak rentals, a shared beach with Big Bay State Park and one of my favorite sites, Big Bay Lagoon.

After our trip last year to the Scottish Highlands, I now call the Big Bay Lagoon the Big Bay Loch because it reminds me of the many lochs we saw in Scotland. Kinda corny I know but that’s my warped thinking!

These few road signs provide some direction to some of the high points, there’s actually almost no way to get lost, the roads all lead back to LaPointe! 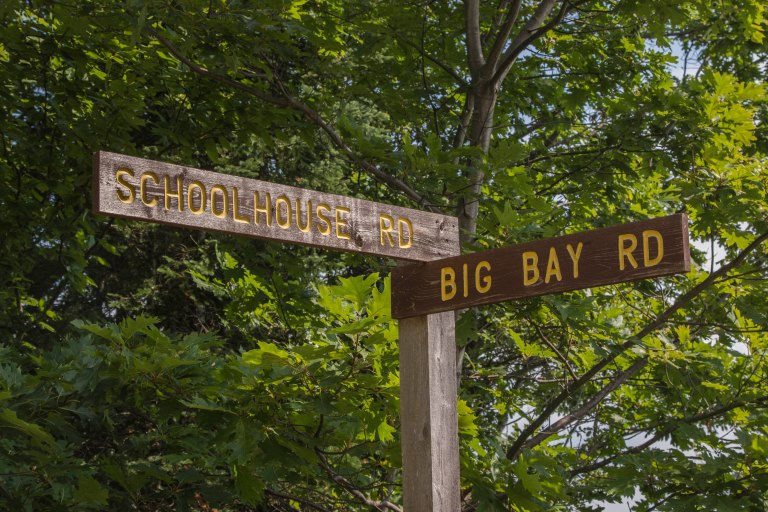 All too soon it was time to leave Madeline Island for home. One does adjust to “Island Time” after a couple of weeks. Here are a few photos as we leave LaPointe and arrive in Bayfield on our last ferry ride this year. 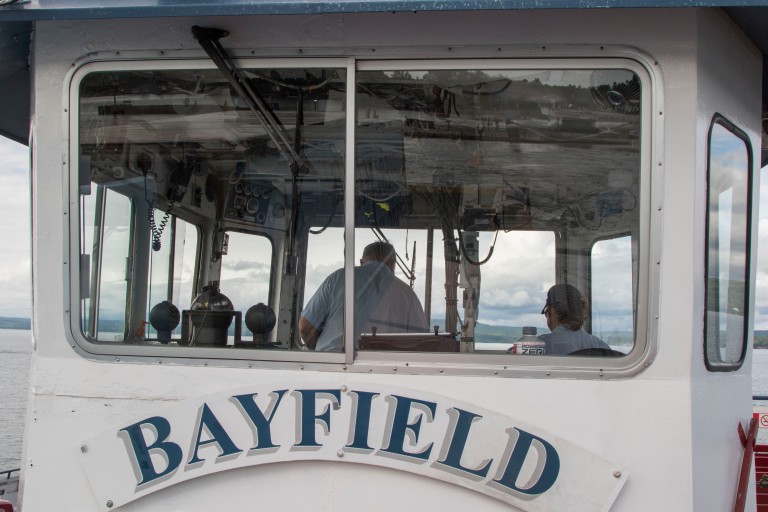 To complete this long post, here’s a couple of photos that I took when we took the ferry over to Bayfield during our stay.

Well that does it for this week. Next week watch for a celebration of my 100th blog post.

Until next week, travel safe.

One thought on “Madeline Island v2017”