Hope all is well with you. This morning (11/21/15) we woke up to……silence! And about 4-5 inches of wet, heavy snow. No cars driving around, or kids walking to school or people heading off to work. Only later was the silence interrupted by the scraping of the snowplow and whirring of snowblowers firing up.  Here’s what it looked like on our street this morning. 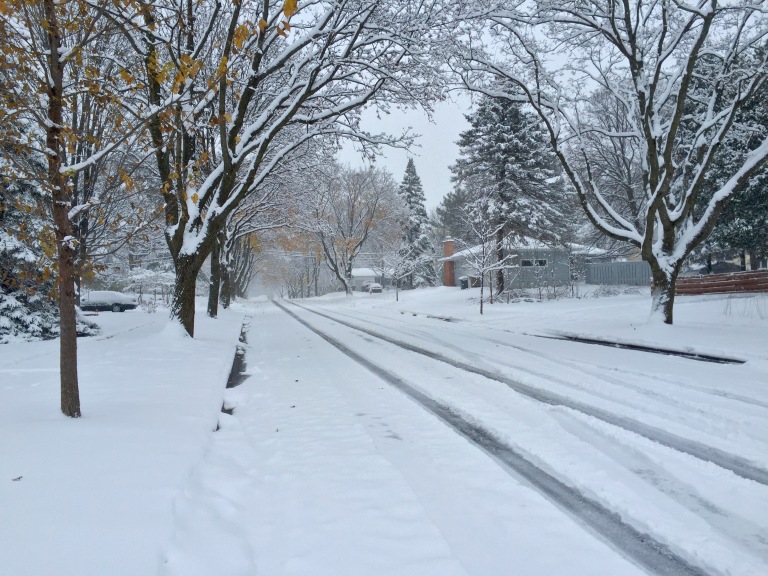 The silence reminded me of being on Madeline Island in early October. After the weekend campers left, the campground was very quiet, it was even more quiet after the water was turned off as most campers were gone. If one went outside after dark, the only thing heard were some owls hooting away and the distant waves beating on the Island shore. Those waves on the cliffs in the State Park made for some interesting sunrise photos. During the photo workshop I attended, we met in the parking lot at about 5:45 AM then made our way down to cliffs to set up in the dark and wait for the light to emerge on the scene. Below is one of the photos I took during this shoot. This is an 8 second exposure so the water looks pretty calm. 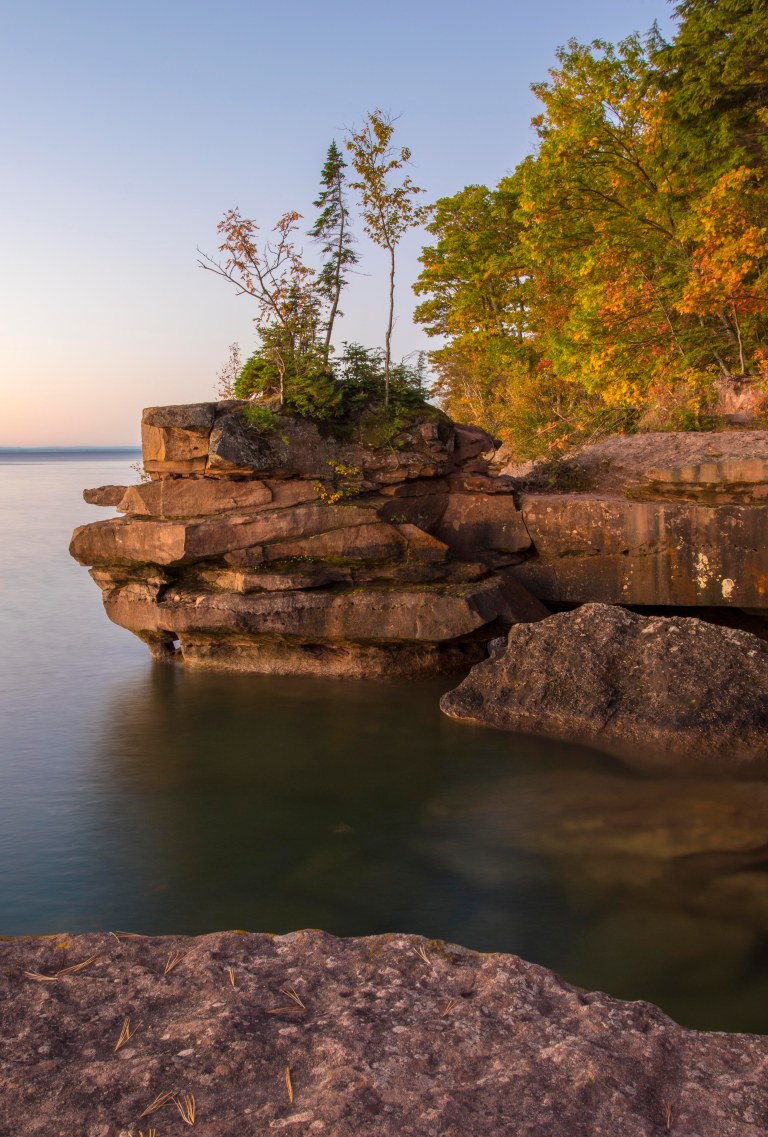 The workshops we were attending at the Madeline Island School of the Arts  were over on Friday afternoon. Donna and I were exhausted after a week of learning (she quilting and photography for me). So it was one of those early to bed nights but it was an early to rise morning as I managed to convince Donna to get up early and go to the cliffs for another early morning shoot. She is practicing her photography skills for our upcoming photo tour to Cuba. This was the first scene that greeted us, the moon and the bright stars just as the sun began to lighten the horizon. It was so awesome that I almost forgot to make some photographs! This was a 15 second exposure. 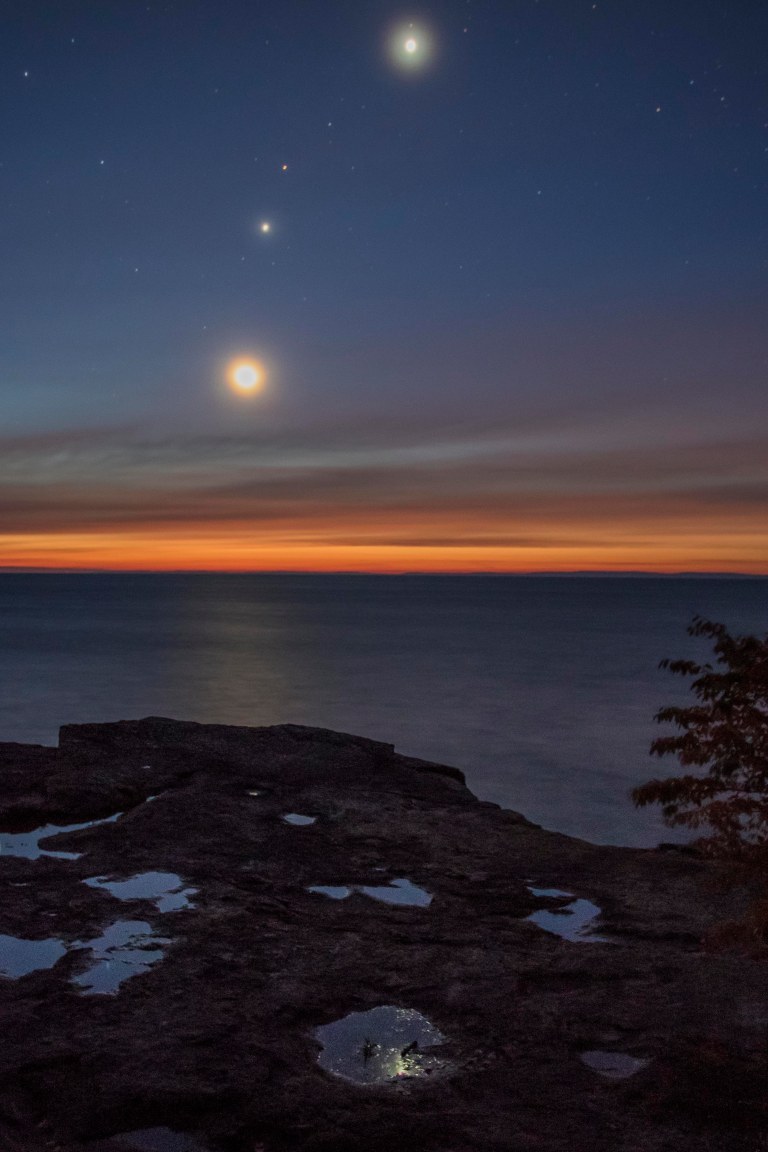 Well, the morning was really windy, so we had to hang on to our cameras and tripods for dear life and watch our step was we made our way on the cliffs. But we were rewarded with some great scenes especially the waves hitting the rocks. Some were so loud it sounded like thunder clapping in your ear! There were also times when spray from the waves would shower us with mist. Here’s one of the many photos I took that morning. The exposure is at 1/6 of second, faster to catch the wave action.

After our morning shoot, we headed back to the campground and packed up the camper and headed for the ferry landing for the ride back to Bayfield. We wondered how the the strong winds would affect the ferry ride. It wasn’t scary but it was rough although the pilot did a great job of avoiding the bigger waves. The few photos I took during the ferry ride weren’t that impressive but here’s one from a few years ago at about the same of year when the colors were at their peak.

On the way back to Madison, we stayed a couple of days in the Copper Falls State Park. The colors were at their peak and it was the weekend (we arrived on Saturday and left Monday) so there were a lot leaf peepers in the park. It was our first visit to this park and it won’t be our last. The lava flows, deep gorges, waterfalls and hiking trails are most excellent, a place to put on your bucket list. Here’s one photo to give you a taste of the beautiful scenery.

That does it for this week. Next week we are traveling to Minneapolis to spend Thanksgiving with Melissa and then on to North Dakota on Friday for a week or so to check on our Mom’s. Melanie, our oldest daughter, headed off to Belize for a week with a group of Penn State students. She just got back on Sunday from a short trip to Cuba with a State of Pennsylvania delegation so looking forward to hear about her adventures. I’ll do my best to recap them in a future blog.

Until next time, have a safe and very happy Thanksgiving. Remember to give thanks for family and friends and remember those less fortunate.